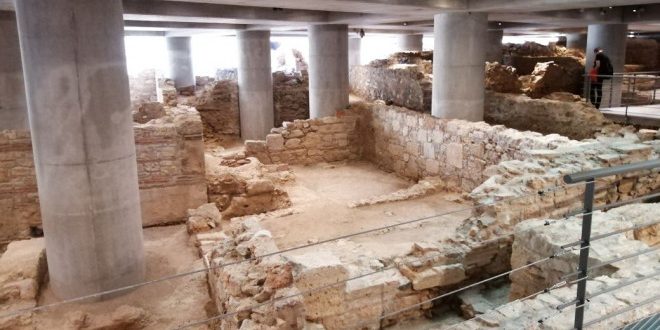 Baths of lavish mansions, workshops, storage rooms and streets of an ancient Athens neighborhood south of the Acropolis have been opened to visitors of the Acropolis Museum. The excavation site extends over an area of 4,000 sq meters and is located beneath the Museum.

For the first time, the visitors can walk though the site that survived from the Classical era to Byzantine times.

Nesting on the gentle south slope of the Acropolis rock, the ancient Athens neighborhood houses life and human activities from the 4th millennium BC until the 12th cent. AD. 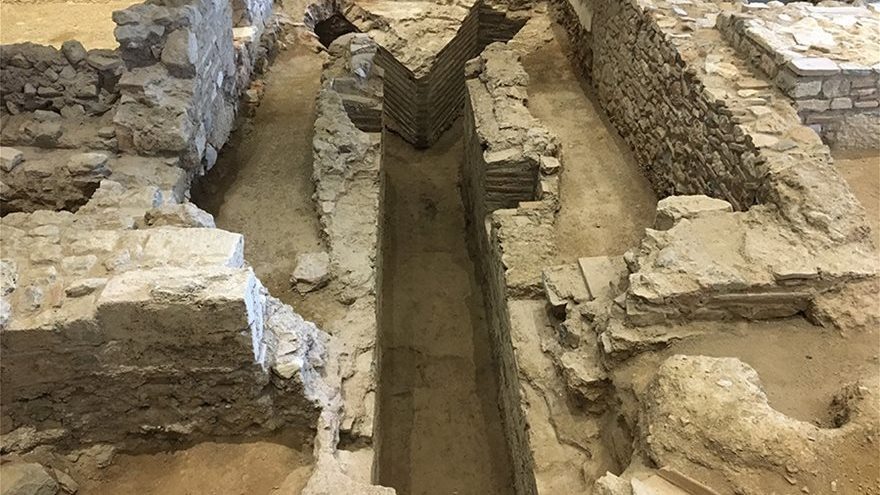 Streets, residences, baths, workshops, tombs and a sewage system compose the complex image of archaeological remains. Among them those of late antiquity are the best preserved. 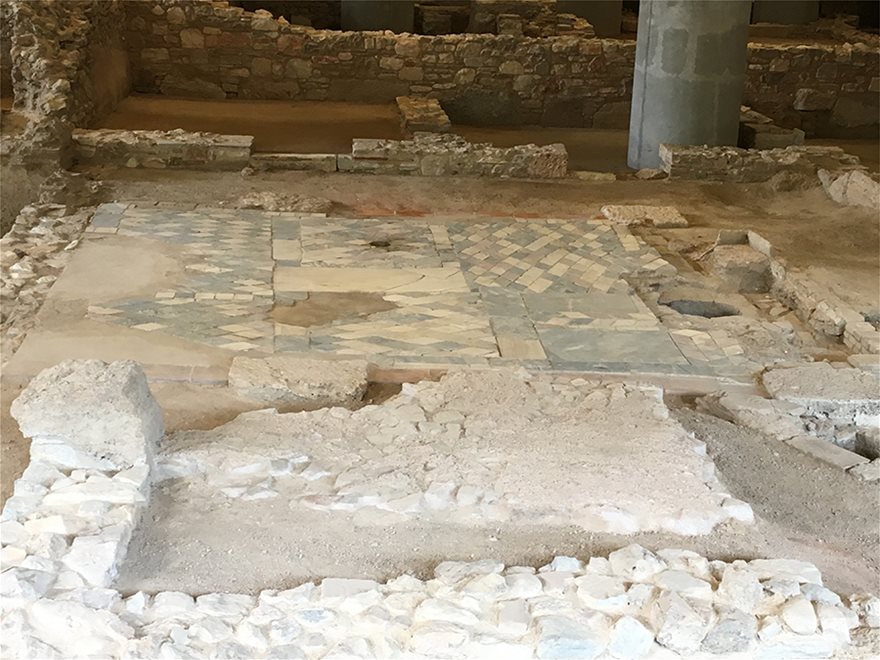 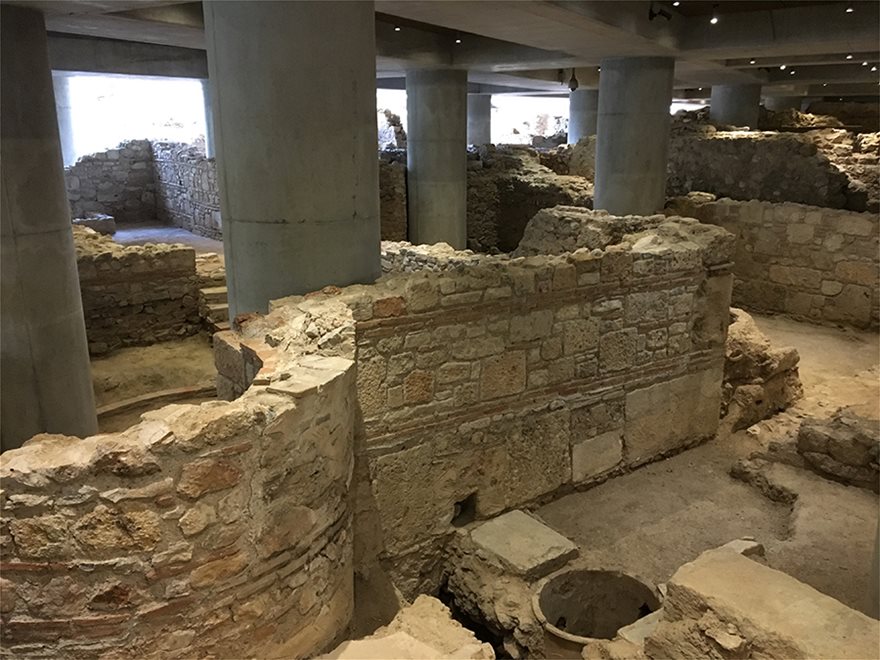 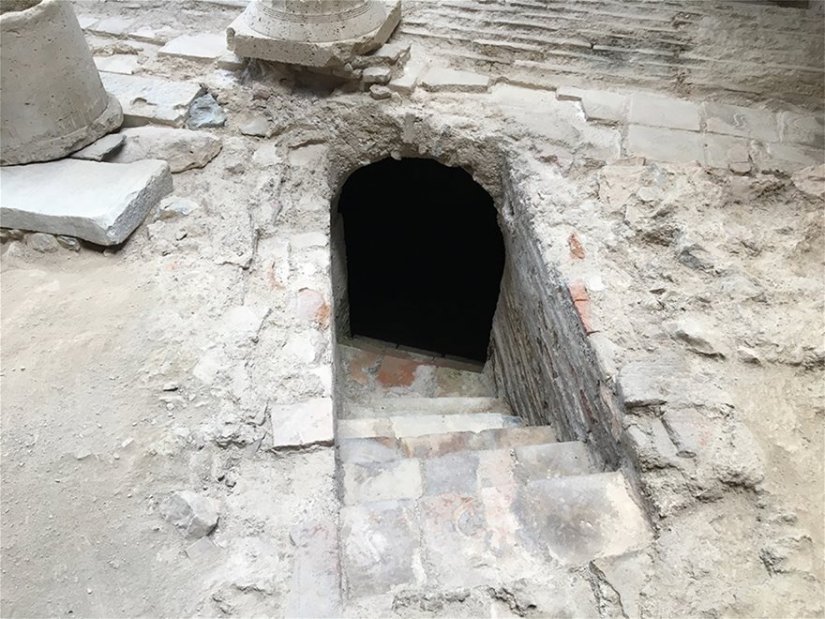 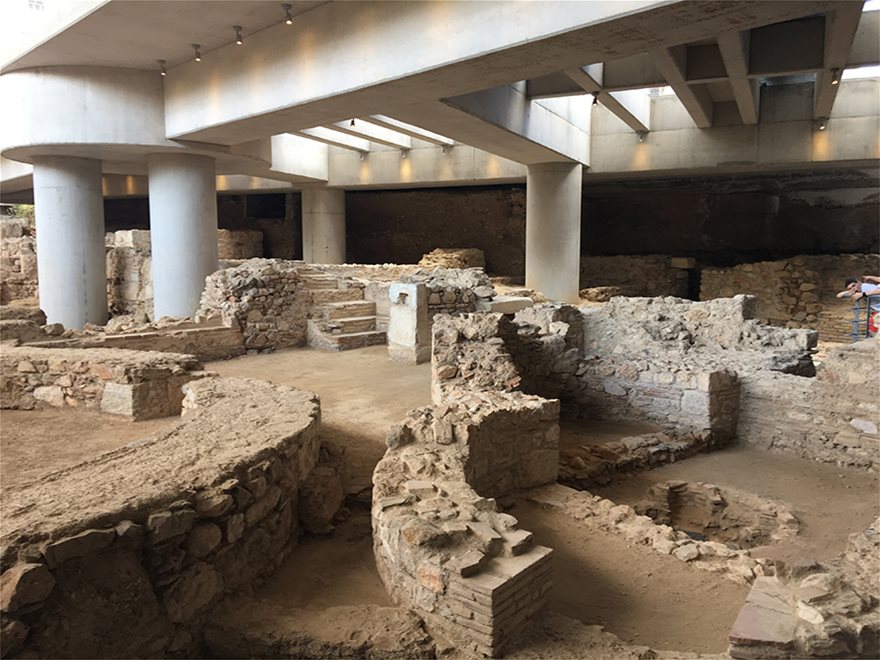 One of the highlights of the excavation site is the home of a wealthy and powerful Athenian. The core of the building dating back to 6. century AD, is a large arched hall [ I heard on TV that it is 170 sq meters large] where the host accepts visitors and offers meals to the guests. The room communicates with a three-room apartment, perhaps a second one with for the closest associates of the owner or a chapel for private worship. The entrance to the lower level is made with six steps leading to an open-air vestibule. The complex was destroyed at the end of the 6th century AD. A little later the lower floor was used by workshops that have been operating at least until the 8th century AD.
The two best saved are in the form of huts and serve at the same time seven or eight people. The sewers with the characteristic holes were not found but the drainage trenches running around the three sides are kept. The ditches receive the sewage which, with the aid of running water, is drained into the central drain that passes underground the main road.

The mosaic floor of the entrance of building Z (middle of 5th cent. AD)

Life here begins sometime between 3500 and 3000 BC. Until the 9th cent. BC houses, workshops and cemeteries coexist or succeed each other. Though sparse, the residential use of the site shapes from the middle of the 8th c. BC. Until the beginning of 5th cent. BC this area is located at the outskirts of the city, outside the fortification walls.

A major change takes place in the end of the 5th cent. BC when the area undergoes street planning acquires its urban character and is incorporated within the city walls. Until the beginning of the 1st cent. BC a dense street network develops, and houses with small interior courts, shops and workshops occupy the area. In 86 BC it is devastated by the troops of the Roman General Sulla and is abandoned for many years. A little later, industrial units are established on top of the ruins.

However, from the middle of the 2nd cent. AD the neighborhood flourishes anew. The houses are now larger. Most of them acquire colonnaded courtyards, rooms with multicolor wall-paintings, and in some instances mosaic floors and private latrines. The most luxurious houses even feature private baths. This prosperity comes to a halt in AD 267 when the Herulians, a germanic tribe of the North, ravage the city of Athens and destroy the site.

The area is reorganized anew in the end of the 4th – beginning of the 5th cent. AD. All houses have colonnade courtyards but their character and dimensions differ. Next to smaller houses, probably belonging to middle-class citizens, stand larger and more luxurious residences, urban mansions of wealthy citizens.

Round the middle of the 5th cent. AD most residencies are repaired and continue to be used. At the same time a luxurious building with mosaic floors and a private bath (Building Z) is established at the place of two older mansions. It is the headquarters of a high ranking official or a local patron with ties to the Imperial court.

In the beginning of the next century, Building Z acquires a new wing (Building E) with innovative architectural features for the city of Athens. This building along others restored or newly erected, indicates the continuity of urban life in a period when Athens is considered to suffer decline and urban shrinkage.

In the end of the 6th c. AD some buildings are destroyed and others badly damaged. The lower level of building E is converted to workshops that function, at least, until the beginning of the 8th cent. AD. They are later abandoned and for several years the area is abandoned. New houses and workshops appear in the 10th-12th cent. AD, which stay in use until the final abandonment of the site at the beginning of the 13th cent. AD

In the beginning of the 19th cent. on top of the ruins of building Z, the first military hospital of the city of Athens, known as “Weiler Building” is erected. Today this building houses the Acropolis Museum’s administrative offices. 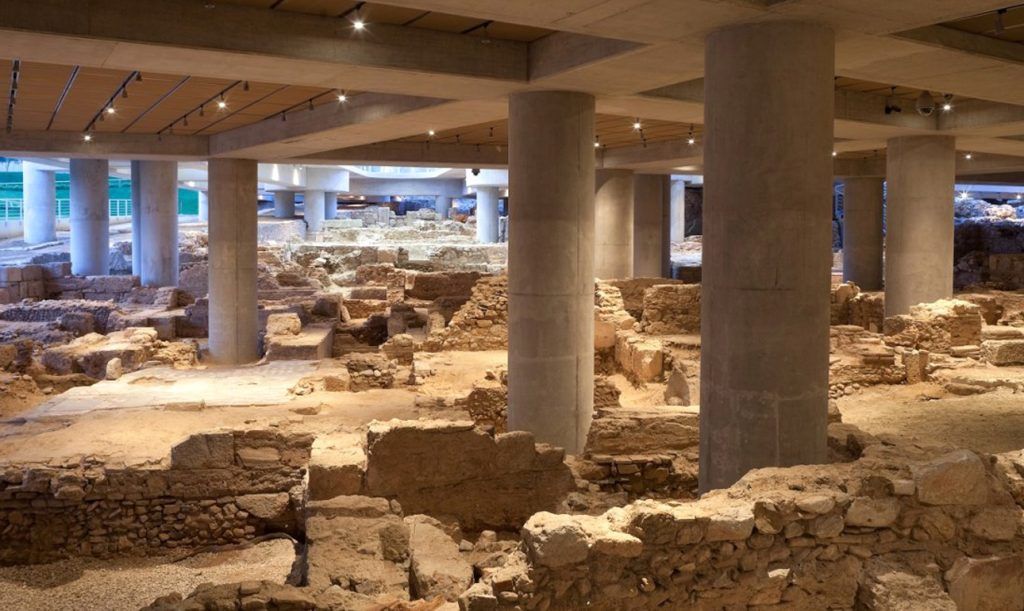 In about a year, a large showcase with more than 1,000 representative findings will be displayed in the excavation site as well as sculptures and architecture fragments.

The additions will unfold even more aspects of the everyday life of the inhabitants of the ancient Athens neighborhood.
For the visiting hours of the excavation site check with the Acropolis Museum website here.