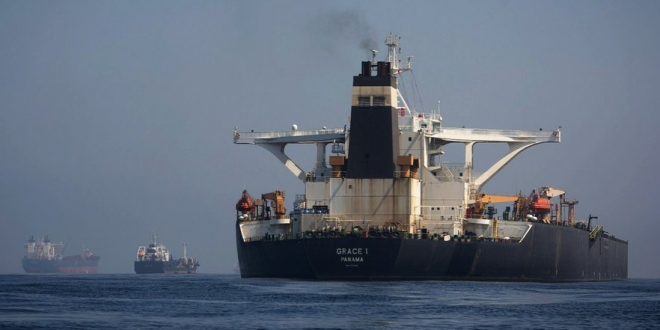 An Iranian tanker at the centre of a confrontation between Washington and Tehran has switched destination and is now heading to Turkey instead of southern Greece, data from real-time ship tracking website MarineTraffic showed on Saturday.

The Adrian Darya, formerly called Grace 1, was released from detention off Gibraltar after a five-week standoff over whether it was carrying Iranian oil to Syria in violation of European Union sanctions in mid-August.

The United States, which says the tanker is controlled by the Iranian Revolutionary Guards, deemed a terrorist group by Washington, has told countries in the region not to assist it.

Previous data had shown that the vessel, which is fully laden with oil, was heading to the port of Kalamata in Southern Greece.

But new data from MarineTraffic on Saturday showed the vessel will now sail past Greece through the Mediterranean and dock at the southern Turkish port of Mersin on Aug. 31.

So far, there is no official reaction from Ankara on the issue.

According to some circulating scenarios, the tanker could reload its load to another tanker or at the port of Mersin, otherwise it can not cross the Suez Canal and return to Iran.

Greece had said it would not offer any facilities to the tanker.

The most tracked ship in the world right now, the ADRIAN DARYA 1 is still reporting Kalamata as its next destination. Most analysts, including our good friends at @TankerTrackers , are certain it won’t head into Greek waters because it is EU territory. pic.twitter.com/VmtUTl4XSs