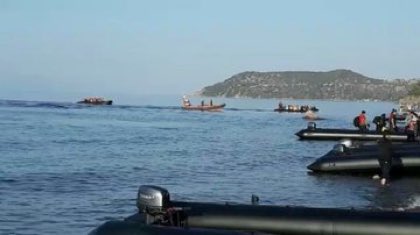 Foreign Minister Nikos Dendias summoned the Turkish ambassador to Athens in order to express Greece’s deep dissatisfaction over the increased influx of migrants from Turkey, that culminated with the unprecedented mass arrivals of more than 500 people on the island of Lesvos on Thursday.

Citing diplomatic sources, state broadcaster ERT TV reported that Minister Dendias reminded the ambassador Burak Ozurgercin the commitments Turkey has made in the framework of the EU-Turkey Joint Declaration of 2016 and the need to implement what has been agreed.

The ambassador said that he would inform the Turkish authorities accordingly and assured that Turkey remains committed to the Joint Declaration and its policy on the matter has not changed.

The Greek diplomatic authorities have briefed the EU on the mass arrivals as the issue is of primarily European interest.

547 migrants, men, women and children on 13 boats arrived at Sykamia on the island of Lesvos within less than an hour on Thursday afternoon.

Referring to the illegal Turkish actions in the Eastern Mediterranean and the Aegean, the foreign minister stressed that the interest of both countries is to promote security and stability in the region.

Therefore, actions that undermine this objective are unacceptable and should be avoided, diplomatic sources make it clear.