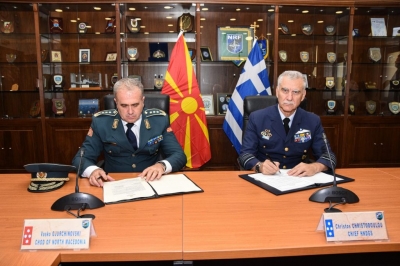 The army chiefs of Greece and North Macedonia have signed an airspace patrol agreement on Monday. According to the Air Policing Agreement, Greek fighter jets will patrol the air space of North Macedonia.

Chief of the Hellenic National Defense General Staff General, Christos Christodoulou, and the Republic of North Macedonia’s Chief of Defense Lieutenant General, Vasko Gjurchinovski, signed the agreement at the headquarters of the 3rd Army Corps, in Thessaloniki.

Next to the signing of the Air Policing Agreement, Christodoulou and Giurchinovksi also discussed issues of mutual interest, the Greek General Staff said in a statement.

The agreement has been signed as North Macedonia prepares its accession to NATO.

Also on Tuesday, during a meeting in Skopje, the Prime Ministers who signed the historic agreement in June 2018, Alexis Tsipras and Zoran Zaef called on the European Union to set the date for the begin of accession talks in October.