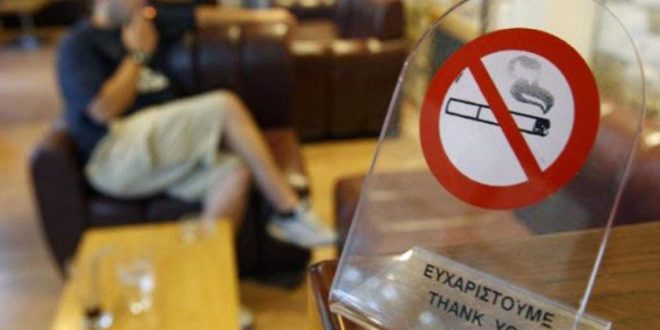 20% of smokers’ fines to policemen to monitor anti-smoking ban

In an effort to stifle policemen objections regarding their involvement in the implementation of anti-smoking law, the Greek Health Ministry plans to give them incentives: 20% of the fines they will impose will go to their own pockets. That is a 20-euro banknote extra for the policeman who catches a smoker violating the anti-smoking ban.

According to information obtained by police news website astynomiko.gr, the ministry is about to draft the relevant legislation that stipulates that 20% of the fines will go to those imposing it.

The Ministry of Health is trying to stifle the reactions of the uniforms to their involvement in the implementation of the anti-smoking law, with bonuses from the fines the police will have for “arresting” smokers.

From the first time, the Health Ministry announced to involve policemen into smokers hunting, the Greek Police Federation POASY has raised its objections.

Already end September, POASY sent a letter to the relevant ministries pointing out that the proposal is at the expense of the main task of the Greek police officer. They argued that their main task was to “suppress all criminal behavior ad to reinforce the security of our citizens.”

“We urge you to reconsider the proposed arrangement in order to ensure that the main task of the Greek Police Officer is not weakened, which is nothing other than faithful implementation of legislation to deter and suppress all criminal behavior and to reinforce the security of our fellow citizens,” the letter stressed among others.

The statement adds that “our Federation makes it clear and warns that any deterioration in the working status of police personnel in order to achieve communication benefits, will meet the total outcry on the part of our trade union movement.”

Anti-smoking laws are being monitored in many European countries by police, such as Denmark, France, Cyprus, the Czech Republic, Poland, Slovakia, Luxembourg, Latvia and Malta, notes Greek media.