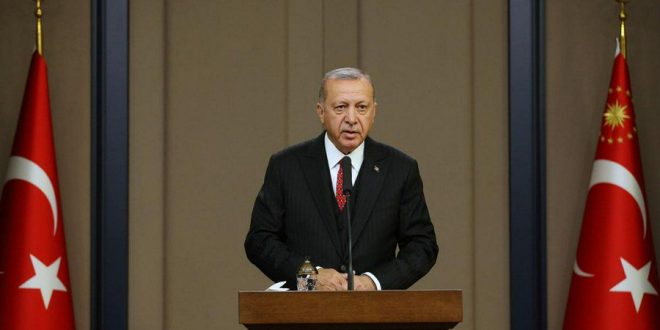 Defending Europe’s condemnation of Turkey’s offensive in Syria, President Recep Tayyip Erdogan threatened to open the door for 3.6 million Syrian refugees, currently in Turkey, and send them to Europe.

Claiming that his critics “are not honest”, Erdogan told a meeting of his AK Party on Thursday that he would open the door to Europe for 3.6 million Syrian refugees, if European countries label Turkey’s military incursion in Syria as an occupation.

Erdogan: “I warn, If EU attempts to describe our operation as occupation, our job is easy, we will open the borders and will send 3.6 million Syrian refugees to Europe.”

“We will open the gates and send 3.6 million refugees your way."

“We will open the gates and send 3.6 million refugees your way,” Turkish President Tayyip Erdogan threatens to send millions of Syrian refugees to Europe if the EU labels Turkey’s military incursion as an occupation.

Not an occupation? Turkey plans to establish a so-called “safe zone” 30-40 km inside Syria in order to resettle the Syrian refugees in Turkey. The zone is though to extend from the West Syria to the borders with North Iraq, along the 480 km South borders of Turkey.

The EU has condemned the Turkish offensive, along with a number of other countries.

European Commission President Jean-Claude Juncker said Turkey must end its offensive, warning no European funding would be granted for a “security zone”.

“Turkey must cease the ongoing military operation. It will not work. And if Turkey’s plan is to create a security zone, do not expect funding from the European Union,” he told the European Parliament in Brussels.

The EU rejected any Turkish plans for a safe zone for refugees, saying it would not provide aid there.

“The EU calls upon Turkey to cease the unilateral military action,” it said in a joint statement of the 28 member states.

“It is unlikely that a so-called ‘safe zone’ in north-east Syria, as envisaged by Turkey, would satisfy international criteria for refugee return.”

Finland that currently holds the EU Presidency, announced on Wednesday that it stops arms exports to Turkey following the Syrian operation and condemned the operation. According to Finnish Prime Minister Antti Rinne, Turkey’s actions have exacerbated the already-complicated humanitarian situation in Syria and could potentially spark a new refugee crisis. Just three weeks ago, the Finnish government approved drone exports to Turkey.

France‘s European affairs minister said that France, Britain and Germany had called for the United Nations Security Council to meet to discuss the Turkish offensive. The UNSC will meet on Syria behind closed doors on Thursday.

Speaking to the parliamentary foreign affairs committee, French EU envoy Amelie de Montchalin said that the three countries were also finalising a joint statement to “strongly condemn” the Turkish offensive, but said a separate EU statement had yet to be agreed because some countries had not signed up to it.

The French foreign ministry has summoned Turkey’s ambassador to a meeting later on Thursday.

French Foreign Minister Jean-Yves Le Drian said that he condemns the operation, which “is jeopardising the anti-Islamic State coalition’s security and humanitarian efforts and is a risk for the security of Europeans.”

“This risks destabilising the region, exacerbating humanitarian suffering, and undermining the progress made against Daesh (Islamic State) which should be our collective focus,” Raab said in a statement.

Dutch Foreign Minister Stef Blok said he had summoned the Turkish ambassador after Ankara launched a military incursion into Syria.

“The Netherlands condemns the Turkish offensive in northeast Syria,” Blok said in a statement. “We call on Turkey not to continue on the path they are going down.”

Turkey’s military operation in northeastern Syria must be restrained, NATO Secretary General Jens Stoltenberg said on Wednesday, adding that it was important not to destabilise the region any further.

Stoltenberg said that Turkey had “legitimate security concerns” and had informed NATO about its attack against Kurdish fighters in Syria.

“I count on Turkey to act with restraint and ensure that any action it may take in northern Syria is proportionate and measured,” he said after meeting Italian Prime Minister Giuseppe Conte. “It is important to avoid actions that may further destabilise the region, escalate tensions and cause more human suffering.”

Egypt called for an emergency meeting of the League of Arab States over Turkey’s offensive into Syria, the Egyptian foreign ministry said.

The UAE foreign ministry condemned the Turkish offensive in a statement carried by the state news agency WAM.

The statement said that the aggression represents a dangerous development and a blatant and unacceptable aggression against the sovereignty of an Arab state in contravention of the rules of international law.

US President Donald Trump said in a statement released by the White House that the US “does not endorse this attack”, adding it is a “bad idea”. He added that he would devastate Turkey’s economy if Ankara’s incursion in Syria wipes out the Kurdish population there. “I will wipe out his [Erdogan’s] economy if that happens. (…) I hope that he will act rationally,” he said.

The turkish military operation started on Wed afternoon, just a few days after Trump ordered the withdrawal of US troops from the area.

Talking to PBS on Wednesday evening, Secretary of State Mike Pompeo said that “the United States didn’t give Turkey the green light” to launch its offensive.

He added however that “the Turks have a legitimate security concern” and that “they have a terrorist threat to their south, we’ve been working to make sure that we did what we could to prevent that terror threat from striking the people in Turkey.”