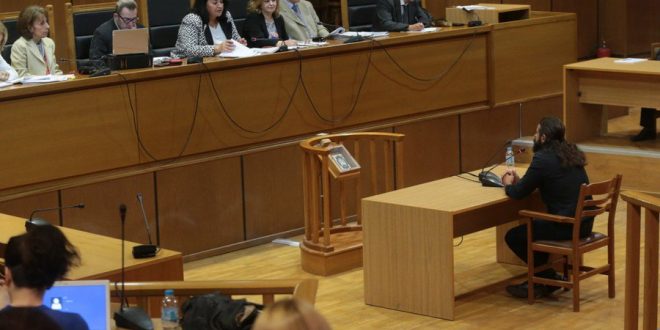 “Hitler was inspired by us. How do you greet the flag or a honored person? They have demonized Hitler. I like that greeting, it has good energy,” former Golden Dawn MP Konstantinos Barbarousis told the court on Monday.
When asked in court about the Nazi symbols the party was using, Barbaroussis, who joined the GD in 2010 said that the Greek Parliament is “full of swastikas on the floor.”

“If they are tempted by these Nazi-things they say about the swastika, which is a Greek symbol, they should also stop the torch relay at the Olympic Games because it was used for the first time in Berlin in 1936,” he said.

He went so far to praise the Nazi salute claiming that the gesture used by those who caused a bloodshed in Europe and caused the death of millions of people ” has good energy.”

“I greet normally. I just greet. So if I was greeted like that [note: he makes the Nazi salute in court room] would it mean I’m on Mykonos? Greeting is body language. The right is the positive, the left is the negative. Hitler was inspired by us. How would you greet the flag or an honorable person? They have demonized Hitler. I like that greeting, it has good energy,” he said.

During his apology, he argued that he wanted to enter the Parliament in order to change the system. “I wanted to be a Member of Parliament to change what we call democracy, and the only democracy in the country is elections every 3-4 years. They cut us funding, that’s  democracy a la carte. ”

Asked about his position on foreigners, he argued that there was “illegal immigration, driven by foreign centers, an invasion of our home country and it should be understood as such.” He argued that he cannot be described as a racist because he has been married twice to foreigners.

His former colleague at the seats of the Greek Parliament but on the same court benches,  Ilias Panagiotaros, claimed that the party did not use the Nazi salute. 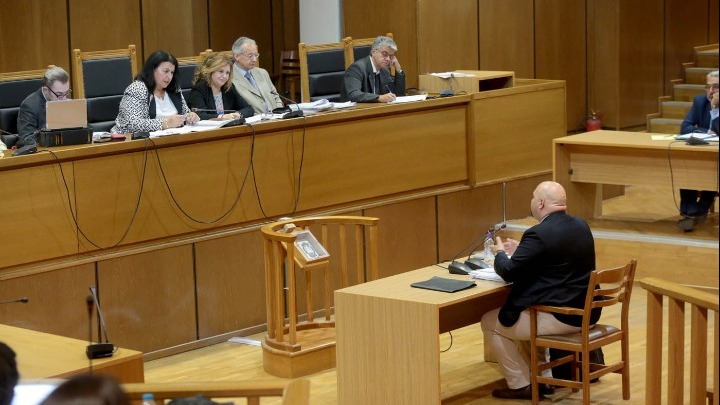 “Golden Dawn has no official salute. With exception of meanders there is no other symbol. People using Nazi symbols are isolated incidents,” he claimed adding “Everyone can do at home whatever he wants.”
He claimed that there was a ban of Hitler-type greetings within the party.
“That was forbidden. Whenever we saw something like this, we would say “put your hand down”. It was not allowed “he said.
Both denied any criminal acts and any involvement in the murder of rapper Pavlos Fyssas.

Panagiotaros claimed that he met [Fyssas’ murderer]  Roupakias and some others involved in the killing “for the first time after the night of the murder.

Without expeption all high-ranking but also low-ranking members of Golden Dawn have been claiming to court that they knew nothing about the murder,  they did not even know each other, they were never involved in criminal acts.

The presence of the neo-nazi party in the Greek Parliament was of limited duration: from June 2012 until July 2019.