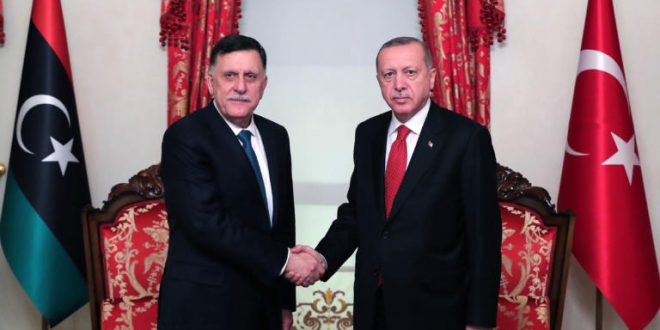 The Greek Foreign Ministry suggests that Turkey blackmailed Libya so that the government in Tripolis signs the agreement of the “maritime boundaries in return of arms, weapons and ammunition. Citing diplomatic sources, media report that Athens has pictures in its hands documenting arms shipments from Turkey to Libya and in violation of the arms embargo.

Turkey blackmailed Libya to consent to the illegal “maritime borders”and receive arms instead, the Greek diplomatic courses reportedly said adding that these pictures reveal the real reason behind the signature by the Libyan government.

The pictures allegedly show the transport of arms by a Turkish vessel in Tripolis. The diplomatic sources did not reveal further details.

A coalition of forces allied with Libya’s UN-recognized Government of National Accord (GNA), some of which face UN sanctions, received a shipment of Turkish armored vehicles and arms on Saturday. The shipment arrived amid the GNA’s efforts to stop the Libyan National Army (LNA), led by Khalifa Haftar, from advancing toward the capital, Tripoli.

Pictures and videos posted by the coalition on its Facebook pages showed what appeared to be dozens of Turkish-made BMC Kirpi armored vehicles in Tripoli port.

“The GNA is fostering its forces defending Tripoli with armored vehicles, ammunition, and quality weapons,” the pro-GNA coalition said on one of its Facebook pages, without giving further details about the origin of the military equipment.

The cargo ship “Amazon,” flying a Moldovan flag, publicly unloaded its cargo midday on Saturday at one of the wharfs of the Tripoli seaport. The vessel had sailed from the northern Black Sea port of Samsun, Turkey.

Its cargo included a shipment of around 40 armored vehicles of Turkish origin that came from northern Turkey. These were met at the port by forces loyal to Salah Badi, leader of the powerful al-Samoud militia, which has in the past opposed the GNA and any political solution in Libya. Badi was added to a UN sanctions blacklist last November.alarabiya

The Greek diplomatic sources reportedly also said that the possibility of EU sanctions against Libya was under consideration but for the time being Greece does not wish to proceed.