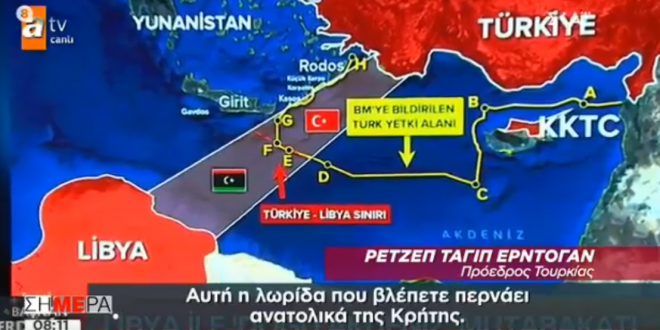 Erdogan vows to drill off Crete

Referring to a map that essentially ignores the presence Greek islands such as Karpathos, Rhodes, Kasos, and obliterates Kastelorizo, Turkish President Recep Tayyip Erdogan has outlined the sea area which he claims as Turkey’s “continental shelf” and where he said his country would “soon” conduced seismic surveys and begin drilling for hydrocarbons.

In a TV show appearance on Sunday evening, the Turkish president said the recent deal between his country and Libya – which has been rejected by the Greek government and the EU – “is, in fact, the reversal of (the treaty) of Sèvres”.

Signed in the aftermath of World War I, the Sèvres treaty marked the beginning of the partitioning of the Ottoman Empire, and its dismemberment.

In an appearance on the A Haber channel (it would be hard to call it an interview as the “neo-sultan” instructed the three journalists present), the Turkish president discussed his provocative plans while using a green laser pointer on a large map projected on a screen.

Pointing to the area between Crete and Kastelorizo, Erdogan announced that “with the help of God, we will also begin seismic investigations and drilling”. He called on large companies to work with Turkey in the region, noting that there are significant hydrocarbon reserves in the eastern Mediterranean.

“This corridor you see passes east of Crete. The northern part of the border here is Turkey and the southern part is Libya. What are these? They are continental shelfs. We can say that here we can do our seismic tests. And then we can drill here … Whatever we do, we will continue our work in this area, in the interests of our people. With the help of God and very soon, we will begin seismic investigations and drilling,” Erdogan said.

Earlier on Sunday after his meeting in Istanbul with the Prime Minister of the Government of National Accord of Libya, Fayez al-Sarraj, Erdogan had said that the agreement with Libya was in accordance with international law.

“The rights of Libya and Turkey will be protected by our agreements; we will not allow unilateral action. Everything we do is in accordance with international law. The agreement with Libya guarantees our rights at the maritime border with Greece,” the Turkish President stressed!

Erdogan declared on Tuesday that Turkey was prepared to send troops into Libya if requested.

“We will protect the rights of Libya and Turkey in the Eastern Mediterranean,” Erdogan told A Haber TV. “We are ready to give Libya any help we need.”

He said Turkey would retaliate against the threat of any US sanctions, adding that it could close down Incirlik air base as well as Kürecik radar base, if necessary.

Incirlik, in southern Turkey, is being used by the US Air Force in operations against ISIS State in Syria. Kürecik, southeastern Turkey. It was established in 2012 for use by NATO as an early-warning radar against ballistic missile attack.