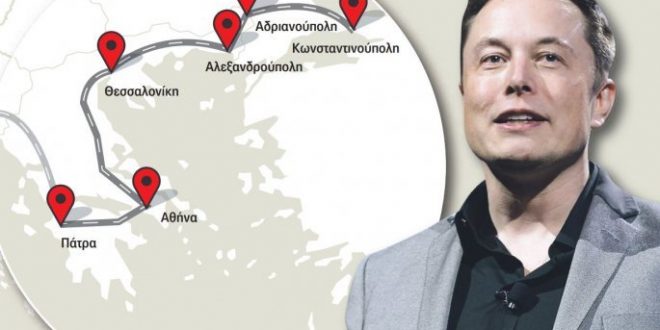 US electric vehicles pioneer Tesla wants to include Greece into Europe’s “electric highway.” The  company of Elon Musk has reportedly already included significant part of the Greek national roads into a developing mega project involving the installation of electric car chargers. The south-European project is planned to start in Portugal and end in Turkey.

According to exclusive information by the Sunday edition of daily ethnos, Tesla executives are currently visiting Athens and have meetings with government officials, as well as with regulatory and management authorities. However, the main thing that the Tesla executives want to see is whether they will have rapid licensing and, overall, whether the institutional framework will facilitate or hinder them.

The largest single “electric” highway designed by Tesla executives on European soil will start in Portugal, run through Spain, southern France, Italy, continue in Greece and will end up in Eastern Thrace and Istanbul, Turkey.

The Greek part of the route will start from the port of Patras to Athens-Thessaloniki-Egnatia Highway -Alexandroupolis in NE Greece..

The total European route Portugal – Turkey is approximately 4,800 kilometers, with a total of 1,500 chargers planned to be installed at approximately 250 charging points.

According to ethnos, the government says it has every positive intention to facilitate Tesla’s investment for two reasons. The first is that including Greece on such a route has obvious economic advantages (tourism, trade, etc.). The second is that the country is obliged to pursue a major electricity project and move quickly in a direction that is desirable and which is also a goal of the European economy.

After theoretical discussions and years of debate, it is only now that the Greek state is beginning to take the first steps in formulating a national electricity policy, with the possibility of the country quickly entering Europe’s major “highways” through it, ethnos notes.

“Whether our country will finally seize the opportunity and really get involved in this electric path will depend to a large extent on whether the US company is convinced that it will not face bureaucratic and other obstacles on Greek soil,” ethnos stresses.

Last month, energy Minister Kostis Chatzidakis announced that the Greek government plans to give incentives to the purchase and the use of electric cars.