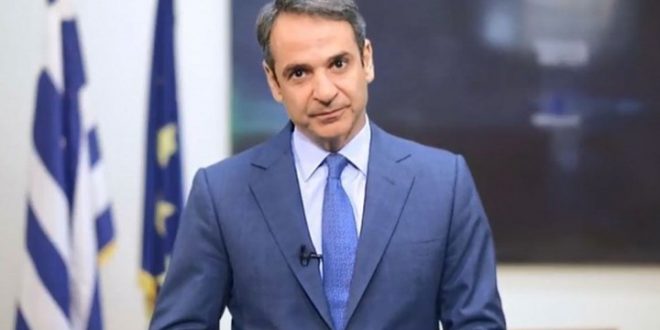 PM Mitsotakis warns “No illegal entries into Greece will be tolerated”

With hundreds of refugees and migrants waiting to cross into Greece, Prime Minister Kyriakos Mitsotakis has toughened his stance on migration and sent clear messages to as many recipients as possible, both in the East and the West.

Greece will not tolerate illegal entries and is increasing border security, are the first messages Mitsotakis sent with posts on social media.

He posted on his social media accounts:

Significant numbers of migrants and refugees have gathered in large groups at the Greek-Turkish land border and have attempted to enter the country illegally. I want to be clear: no illegal entries into Greece will be tolerated. We are increasing our border security.

Greece bears no responsibility for the attacks in Idlib, Syria, where 33 Turkish soldiers were killed and dozens were injured and is not willing to suffer for this, the Prime Minister said in a second message,

Greece does not bear any responsibility for the tragic events in Syria and will not suffer the consequences of decisions taken by others. I have informed the European Union of the situation.

Earlier on Friday, Greece closed one of its customs land borders to Turkey, tightened its sea and land borders and sent the Chief of General Staff to Evros in the North-East and the Aegean islands for inspection.

Just two days ago, Mitsotakis urged migrants to not come to Greece.

PS The migration issue has slowly overwhelmed the conservative government that underestimated the issue when it came into power in summer, sticking into a blame-game with the former government of left-wing SYRIZA. New Democracy spent the last eight months doing fairly nothing on the issue, and just in the last couple of weeks, decided to take action: close the overcrowded camps and create new closed ones on the islands. This led to an outcry from the local community and authoritarian polices that ended in excessive police violence against protesting islanders in the past couple of days.