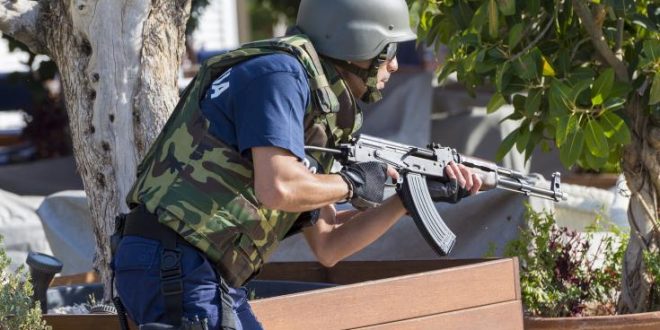 A C-130 of the Greek Air Force left Cyprus for northern Greece early Sunday evening. On board of the aircraft 22 members of the Cypriot security forces deployed to the Evros region to assist the Greek security forces at the border with Turkey.

#HellenicAirForce C-130H from Republic of #Cyprus towards Alexandroupolis International Airport with a RIOT Police unit as reinforcements to #EuropeanUnion #Greekborder in Evros#Greece_under_attacκ pic.twitter.com/QiJM8dXTjh

A written statement by Cypriot government spokesman Kyriakos Kousios said that the two leaders discussed the latest developments regarding the migrant issue and Turkey’s policy on the issue as well as the situation at the borders of Greece with Turkey and the growing influx of migrants to Cyprus.

According to Kousios, Anastasiades informed Mitsotakis that Cyprus is ready to send forces to Greece to help it protect its borders, stipulating that they are also Europe’s borders.

Mitsotakis accepted the offer and security forces would be sent to Greece immediately to “protect and guard the borders of Greece and Europe.”

Kousios’ statement also added that Anastasiades and Mitsotakis agreed on the stance they will keep during a phone discussion they will have on Sunday evening with the President of the European Council Charles Michel in light of the talks between Michel, Turkish President Tayyip Erdogan and German Chancellor Angela Merkel.

The deployment of the “Cypriot brothers” was met with excitement by some Greeks on social media.

22 Cypriot fly tonight with the Hellenic Air Force for Evros!