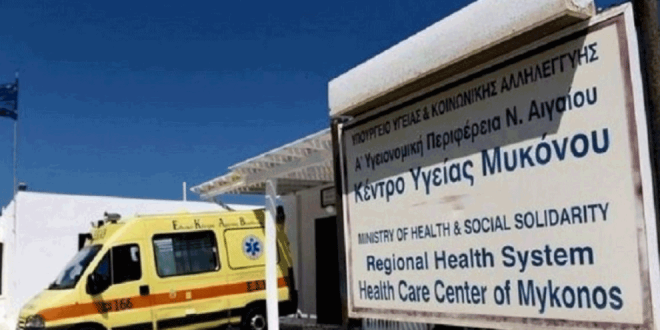 Heath and local authorities are urging residents on the island of Mykonos to stay at home, after the first case of coronavirus was confirmed on Thursday. 69-year-old woman was transported from Mykonos to a designated hospital in Athens earlier on Thursday.

The woman was initially in the health center of the island, she was transported to the airport inside a special designed container and from there with a military helicopter to Greek capital.

Local authorities are deeply concerned about the outbreak in the island of the Aegean Sea, especially because the infected patient had not traveled outside Mykonos lately.

According to local media, the woman is a permanent resident of the island from the area of ​​Ano Meria and has not traveled lately. The 69-year-old showed symptoms about ten days ago and, following instructions by a private doctor, she was isolated at home waiting for her health to improve.

However, her condition deteriorated and she decided to visit the Mykonos Health Center, where she was hospitalized with lower respiratory infection, in a special designed room. She was tested on COVID-19, the results came out on Wednesday night.

As the source of her contamination remains unknown, health authorities on the island are tracing her contacts.

The mayor of Mykonos, Konstantinos Koukas, and the head of Civil Protection Nikos Hardalias are appealing to the islanders to stay home and adhere to the security measures and instructions of the authorities.

“If some think that the movement restrictions do not apply to them or that they are fully protected, they are wrong,” Koukas said in his appeal.

Hardalias announced that all construction activities on the island are suspended.

The first confirmed case of coronavirus has been also found on the island of Kos. According to local media, infected is a 49-year-old man who recently flew from Athens to the island.

The test sample was sent to Pasteur Institute on March 29, the results came out on April 2.

The patient placed himself in self-isolation and did not come in contact with other people, a statement issued by the general hospital of Kos said adding that the infected has been asymptomatic in the last three days and will return to his work next week.

Residents and authorities on Greek islands consider the coronavirus outbreak as especially risky due to the poor health facilities.