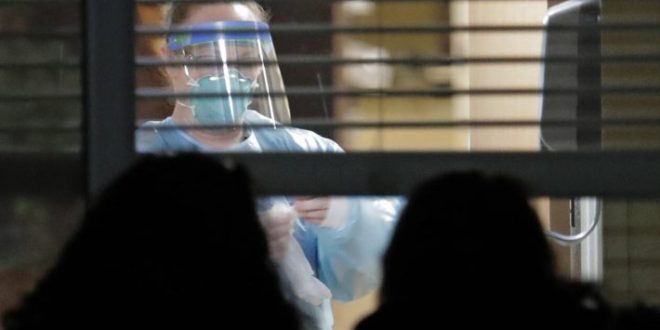 Six people died in Greece between Friday morning and afternoon, increasing the death toll due to coronavirus to 59. Three of the deceased were hospitalized in northern Greece, one in Athens. One of deceased was from the village Echinos, placed under quarantine since March 25.

One of them was a 72-year-old woman intubated in Papanikolaou Hospital in Thessaloniki, one 57-year-old man hospitalized in Edessa and another man, 78, intubated in the hospital in Alexandroupolis, north-eastern Greece.

The latest victim is a 52-year-old man hospitalized in designated Attikon hospital in Athens. He passed away on late Friday afternoon.

The total number of fatalities due to COVIS-19 is 59.

15 of the deaths have been recorded in West Macedonia ( 7 in Kastoria and 8 in Kozani) and 19 in Xanthi, NE Greece.

According to official date on Thursday,case fatality rate was at 3%.

National Health Organization spokesman Sotiris Tsiodras announced on Friday, 99 new confirmed cases and the total cases across the country to have risen to 1,613.

92 patients were intubated in ICUs. their average age at 66. AMong the intubated are 23 women. 70% had underlying health issues or was of high age.

11 people have been discharged form the ICUs.

18,844 tests conducted in the country since the outbreak end of February.

While the number of patients hospitalized outside ICUs is not included in the daily briefing by the health authorities, Deputy Health Minister Vassilis Kontozamanis told the Parliament on Thursday, that “530 people infected with coronavirus or with suspected coronavirus symptoms are being treated in public hospitals.”

Tsiodras was rather confusing on Thursday. He announced “27 new confirmed cases and 23 in Ritsona asylum seekers camp and 49 on the ship,” the ferry that was anchored off the port of Piraeus. Contrary to his daily statements, Tsiodras refrained from giving the total number of confirmed cases even after the head of Civil Protection Nikos Hardalias stated in the dame briefing that “119 passengers on Elftherios Venizelos ferry were tested positive.”

On social media, Greeks criticized the new “counting,” accusing Tsiodras of counting only the confirmed cases among Greeks.