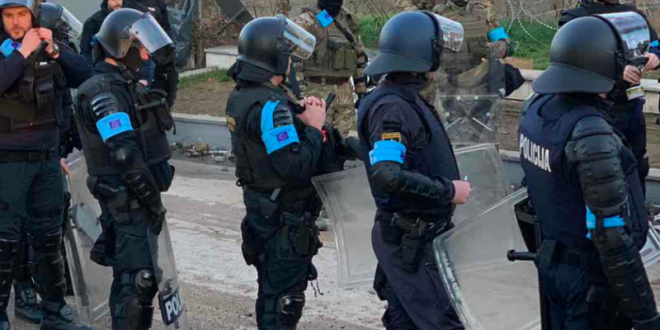 A dangerous incident took place at the Evros border netween Turkey and Greece, when Turkish soldiers fired warning shot and then aimed at German officers patrolling with border with Greece. According to an exclusive story by German magazine Der Spiegel the incident took place on April 28.

Frontex has deployed some 100 officers, among them 20 Germans, in Greece along the Evros border in March as part of the so-called RAPID intervention requested by Athens, when Turkey was pushing thousands of migrants to Europe.

The Turkish soldiers targeted German officials and fired at least one shot; it is unclear where the bullet went to.

No one was injured in the incident that was confirmed by both the European border protection agency Frontex and the German Ministry of Interior.

The incident occurred near the Greek town of Tychero

Citing an internal document of Frontex, Der Spiegel writes that “a Turkish soldier fired a shot at 7:15 p.m. on Tuesday evening when German officer were on the other side of the border.”

The German border guard reportedly heard a shot from the Turkish side of the border and he immediately took cover.

Through a pair of binoculars, the German border guards saw a Turkish soldier aiming an automatic weapon at the Greek side on the other side of the river shore.

Then the Turkish soldier showed his right middle finger and went back to his tent. Other soldiers would have shouted “come, come”. A short time later, six more Turkish soldiers had appeared and were once again aiming their weapons at the German and Greek border guards.

Frontex said on a Spiegel request that all the facts about the incident were with the Greek authorities.

The Turkish government was unavailable for comment on Thursday, the German magazine notes.

Germany has been participating in the Frontex mission in Greece for several years. It is mostly federal police officers who assist the Greek authorities in checking the border, but the state police also provide officials for the German Frontex force. By March there were usually around 60 civil servants.

A day after he incident, Greece’s deputy migration minister George Koumoutsakos had a teleconference with FRONTEX boss Fabrice Leggeri. The two men discussed the dispatch of additional reinforcements by Frontex to Greece in light of anticipated increased summer migrant arrivals.