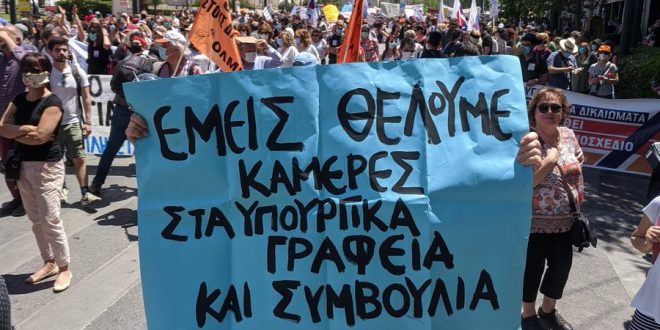 The controversial use of cameras in schools has sent teachers,, students and pupils but also parents to the streets of Athens on Wednesday. Hundreds marched in the city center to protest the use of cameras in class rooms and have teaching classes broadcast live for educational purposes, for students unable to attend school during the pandemic. 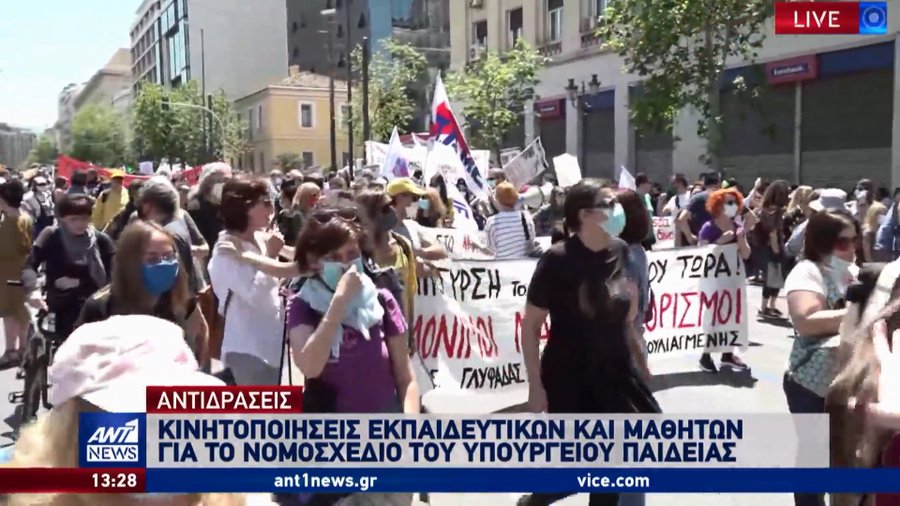 Teachers’ unions, students and parents’ organizations raised their voice saying this practice was illegal as it does not protect their privacy.

One of the banners protesters held was reading “school life i not a reality show.”

Protesters carried a poster reading ” We want cameras in ministers’ offices and meetings.”

Protesters gathered at the Monument of Unknown Soldier in front of the Greek Parliament and at some point a group climbed the stair leading to the building. Riot police forces stopped them from entering.

The protesters who also demanded a withdrawal of the education reform bill, shouted that that they will remain on the streets until Education Minister, Niki Kerameos leaves the post.

With a relevant amendment, the government made the videotaping and the live streaming legal, despite the strong opposition from teachers and parents and without the consent of the Greek Data Protection Authoritiy (AADE.)

“In contrast to government assurances of “consent” of the AADE, there is no written approval by the authority,” daily efsyn reported.

In a joint press conference on Tuesday, Minister of Education claimed that the provision was drafted after consultation with the AADe, while government spokesman Stelios Petsas, said that “the Authority has been consulted” and that “we have the consent of the Personal Data Protection Authority for the procedure. So there is no question of any violation of children’s personal data. ”

“However, a written opinion from the Authority has not yet been made public by the government, while the information says that it has not been given because, at least until now, it does not exist,” efsyn reveals. Citing sources it adds that “the Authority has not yet taken a clear position and is cautious (without necessarily implying a denial), but it is examining all aspects and all views.”

“However, the Data Protection Authority has made it clear from the outset that in the event of a video recording of the school course, guarantees are required that the camera installed in the room will not focus on the desks and faces of students,” the sources stressed.

In fact, students and parents have to give their consent to this video recording procedure. According to teachers, videotaping lessons threatens the personal teacher-student relationship and turning the teaching from a dynamic situation to a static live streaming.

A similar issued was raised a couple of years ago, when security cameras were to be installed outside the classrooms. AADE had ruled that “they could not operate when there were students and teachers at the school.”

After tow months, schools opened again on May 11, for the students of the 3. grade of Lyceum. School operation is not smooth as students go to school in rotation. No more than 60% of the students reportedly attended the classes in the first week. Students at this grade are intensively preparing for the university entrance exams in June. Some of them refrained from returning to school out of fear of the pandemic, because they or a family member belong to a high risk group. Students’ participation reportedly decreased even further after the first day and the lessons on social distancing, antiseptics and temperature measurement.

Schools for the other two Lyceums degrees and Gymnasium are scheduled to open on May 18.

So far, the Education Ministry has not decided yet, when and whether primary schools and kindergarten will open again before the summer break or in the next school year, in September.