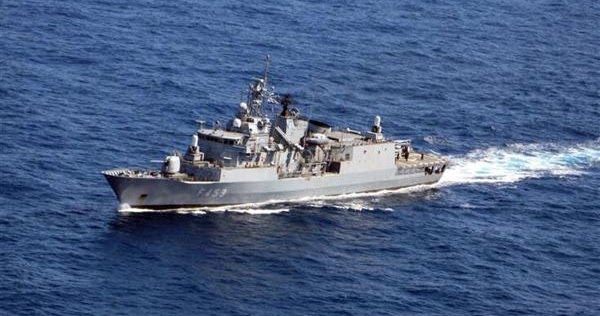 A Turkish cargo vessel suspected of transporting arms to Libya has rejected a call for inspection sent by a Greek frigate within the framework of EU’s  Operation Irini that safeguards the UN-imposed arms embargo to the country in North Africa.

The Turkish vessels has been spotted in the central Mediterranean Sea on Wednesday morning.

The Ro-Ro vessel CIRKIN under Tanzanian flag is accompanied by three frigates of the Turkish Navy.

According to media reports, the Italian commander of the Operation IRINI instructed the Greek frigate HS Spetsai to conduct an inspection of the vessel.

Spetsai deployed a helicopter that sent out an inspection signal to the Turkish vessel.

The call was rejected with a response by one of the Turkish frigates saying that vessel “Cirkin”was “under the protection of the Turkish Republic,” ANT1 TV reported. The helicopter returned to the Greek frigate.

The convoy is continuing its journey towards the Libyan coast, it looks as if it is heading to the port of Benghazi..

The incident took place South-West of the island of Crete in international waters early morning Wednesday. It looks as if it is heading to the port of Benghazi.

It is now up to the Italian Commander of Irini Operation to decide about the next steps.

According to latest reports early afternoon, the Greek frigate is instructed to closely monitor the CIRKIN.

Operation EUNAVFOR MED IRINI that succeeded Operation SOPHIA was launch in March, but the only ship in the area is reportedly the Greek frigate.

The Italian command ship is an auxiliary ship anchored in a port of Italy.

French and German ships have declared to participate in the mission.

Turkey supports the Tripoli-based Government of National Accord (GNA) and has sent armament violating the UN-imposed arms embargo. In a similar incident that took place in January 2020, a French frigate was involved.

KTG understands that such missions are not authorized to enforce a naval inspection of a ship in international waters without the captain’s consent.