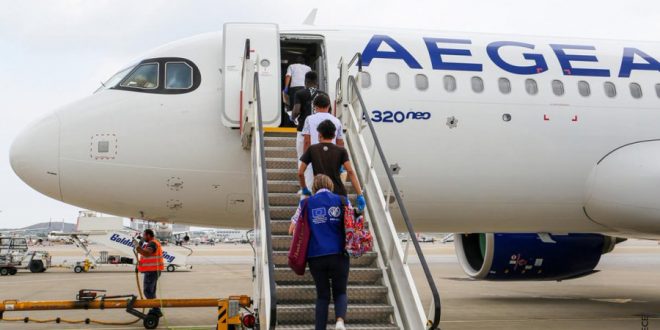 Forty-nine unaccompanied refugee minors have left Greece for Finland and Portugal in the last two days. The two groups left in the framework of the relocation of a total of 1,600 unaccompanied minors to other european countries.

24 unaccompanied refugee minors departed Athens fro relocation to Finland on Wednesday. The group comprised 23 Afghani children and 1 Palestinian, who were living in refugee facilities at the islands of Chios, Kos, Lesvos and Samos.

It was the first group of a total of 100 refugee minors Finland has agreed to relocate from Greece.

On Tuesday, a group of 25 unaccompanied refugee children left Greece for Portugal.

The children were living on Lesvos, Chios and Samos islands and are all boys aged 14 to 16. they originate  from Afghanistan, Egypt, Gambia, and Iraq.

“Portugal has expressed interest in relocating 500 children in general,” Alternate Migration and Asylum Minister Giorgos Koumoutsakos said during the farewell event at the airport.

“This is a strong demonstration of help for Greece, which faces a challenge beyond its ability to cope with,” he added.

The relocation of the refugee children was welcomed by several UN agencies such as the International Organization for Migration (IOM), the UN Refugee Agency (UNHCR) and the UN Children’s Fund (UNICEF).

We thank the governments of Portugal and Finland for their #EUsolidarity with the 49 relocated children and with Greece.

Greece initiated the relocation of 1,600 unaccompanied minors to other European countries, in collaboration with the European Commissioner for Home Affairs Ylva Johansson and the help of the UN High Commission for Refugees, the International Migration Organization and the European Asylum Support Office Service.

In the framework of the relocation program, a group of 243 children with serious illnesses will be relocated with their families in Germany.

Alternate Minister Koumoutsakos said also that a voluntary repatriation of 5,000 people applying for asylum with financial incentives planned by Greece and funded by the EU is ongoing. The first flight, to Iraq, will take place in a few days.