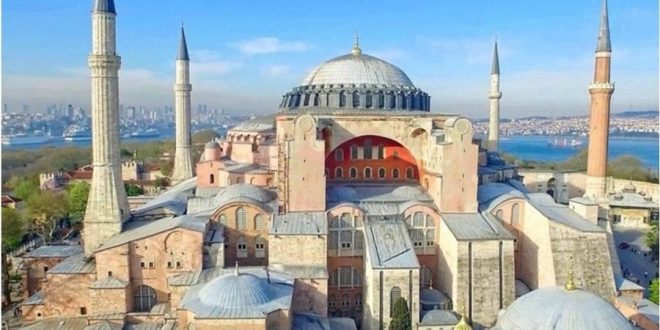 Turkey’s top administrative court, the Council of State, on Friday annulled the 1934 decree by Ataturk’s government that turned Hagia Sophia from a mosque into a museum. The long-awaited ruling opens the way for Istanbul’s iconic Hagia Sophia to be converted into a mosque again.

Shortly after the Council of State announcement, hundreds to Turks started to gather outside Hagia Sophia and cheered demanding that it opens immediately for prayers.

The court reportedly based its verdict on the fact that the Hagia Sophia was a property of the Fatih Sultan Mehmet Foundation and registered to be used only as a mosque. The decision to grant a status of museum to the Hagia Sophia was given by former President Mustafa Kemal Atatürk in 1934.

The reasoning of the Council of State stressed that the government in 1934 had no powers to change the status of the religious structure.

The ruling is expected to be published in the Official Gazette in the coming days. There is no clarity whether the current government has to issue another decree for the opening of the Hagia Sophia as a mosque.

The only one who can appeal the court’s decision is President Recep Tayyip Erdogan.

The decision is a shock not only to the Greek Orthodox community but to the Christians around the world in general.

The ruling comes following strong reactions by the U.S., Russia, France and Greece but also from the UNESCO that warned to review the “World Heritage status” of the Hagia Sophia.

Hagia Sophia, part of the property “Historic Areas of Istanbul,” is inscribed on the #WorldHeritage List as a museum.

The inscription entails a number of legal commitments and obligations.

The Hagia Sophia, one of the world’s most important historical and cultural heritage sites, was built in the sixth century during the reign of the Byzantine Empire and served as the seat of the Greek Orthodox Church. It was converted into an imperial mosque with the Ottoman conquest of Constantinople in 1453. The structure was converted into a museum during the strictly secular single-party rule in 1935.

“But there have been discussions about converting it back to a mosque, with public demand to restore it as a place of worship gaining traction on social media,” write Turkish media.

What Turkish media do not mention is that converting Hagia Sophia into a mosque was the ultimate goal of Erdogan in order to bury once and for all Kemal Ataturk’s secularism in Turkey.

In absence of cultural education, Erdogan noted further that there are 435 churches and synagogues in Turkey where Christian and Jews can pray.

“The issue of Hagia Sophia’s statute is an internal affair of Turkey and its right of sovereignty,” Cengiz Tomar, rector of Ahmet Yesevi University told Turkish Daily Sabah. “It was turned into a museum through a Cabinet decree and can once again turn into a mosque with a decree. However, since there will be both internal and external reactions, in response the government would have wanted to support the legality of the decision with a high court legal opinion.”

“Whether positive or negative, this decision is the right of the government and has significant support from the people, Tomar said.

Reopening Istanbul’s Hagia Sophia for prayers will not deprive it of its identity, as it will always belong to the world’s historical heritage, Ibrahim Kalın, Turkey’s presidential spokesperson, told Anadolu Agency (AA) on Thursday.

Kalin claimed that opening Hagia Sophia to Islamic prayer will not hinder people from visiting it adding that “Turkey will still preserve the Christian icons there, just like our ancestors preserved all Christian values.”

There is currently talk in Turkish media, that Hagia Sophia may open as mosque on Fridays, and remain a museum the other days.

Erdogan is to address the nation on Friday evening.