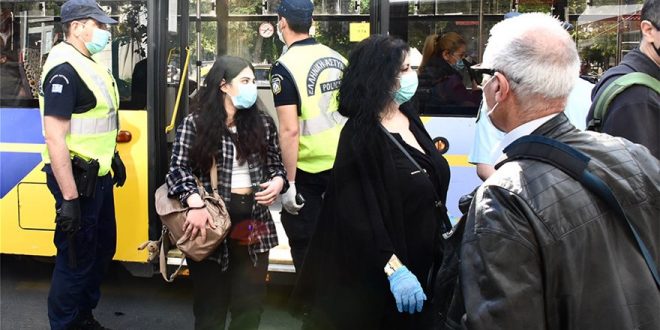 Greece fines passengers in public transport means if capacity over 65%

The theater of the absurd: The Greek Transportation Ministry as reduced itineraries of public transport means due to summer season – as every year- and at the same time it will fine passengers if they are found to be onboard where the 65% capacity limit has been exceeded.  The limit of capacity has been implemented due to the coronavirus pandemic.

Of course, such genius politicians have never got into a public transport means to go to work and have no idea how the passengers will calculate whether a bus is full at 60% or 65%.  But their trick is simple: deny own responsibility, transfer responsibility to the people.

According to athenstransport, Transport Minister Costas Karamanlis said that “overcrowding is inevitable” as the government maintains the limit of 65% capacity in public transport means due to coronavirus.

However, passengers and transport workers are under the daily threat of paying fines.

According to the latest Transport Ministry decision published in the official gazette on July 26, 2020, public buses, metro, tram, trains are allowed to transport passengers up to 65% of the capacity per vehicle/train.wagon.

“Violation of this provision results in a fine of 150 euros to each passenger in excess of 65%, as well as to the driver of the public transport mean,” the ministerial decision states.

A fine of 150 euros is also to be imposed on passengers who do not wear a protective mask.”

The capacity limit has been in force since beginning of June. Previously it was at 50%.

The measure is renewed every two weeks.

Since the start of the measure, TRAINOSE trains were reportedly stopped when it was found that too many passengers were onboard. In at least two cases, police had called on passengers to disembark.