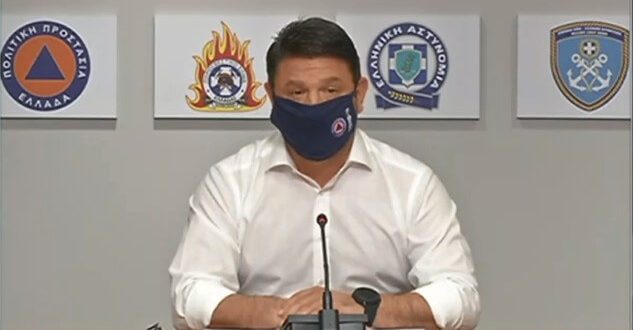 Greece announced on Friday additional measures and restrictions to prevent the increasing trend of the spread of the coronavirus in the country. The measures include the closure of restaurants and bars in Attica by midnight, limit to the number of people participating in social events, the use of mask in closed structures such as military camps, molecular PCR test for specific categories of workers and recommendation of teleworking in public and private sector.

Announcing the measures, head of Civil Protection and Deputy Minister for Crisis Management, Nikos Hardalias, appealed at young people and urged them to fully comply with the new restrictions and demonstrate “personal responsibility.

“Data of the last few days show a spread in touristic areas and concern mainly the younger ages,” Hardalias stressed adding that we are “in the beginning of the second wave of coronavirus.”

From the beginning of the outbreak on February 25 until August 9, there have been 5,623 cases in the country, and currently active are 1,424, he said. A total of 1,146 patients have been discharged from hospitals and 2,839 have recovered at home.

In the last week, 961 additional active cases were recorded, that is, their number doubled compared to the previous week. This shows how important it is to follow the measures in order to contain the spread of the virus. Because, as we always say, in order for measures to be effective, they must be implemented by all, without exception, Hardalias said.

Announcing the new measures, Hardalias recalled the mandatory negative molecular test (PCR test) for travelers from Sweden, the Czech Republic, Belgium, Spain, the Netherlands (August 17-31) and Malta (since August 12) as well as the restrictions in entries from Kakavia border crossing with Albania as well as 7-day home isolation fro travelers from Albania (as of August 16).

He recalled also that children up to 10 years old, that is born after 2011, are exempted from a negative test (PCR) when they enter Greece via land border or airports.

The new measures in detail

From August 14 until August 24: vars and restaurants in Attica will close at midnight. Operation from midnight until 7 a.m. next morning is prohibited.

Excluded from the restriction are delivery and take away services, without the sale of alcohol., are excluded from

In case of violation, an administrative fine of 10,000 euros is imposed, while in case of a second violation, the operation is the business facility is suspended for 20 days.

From August 14 until August 24, the number of people participating in gatherings and social events is limited to 50 in areas with high epidemiological load.

Use of a mask
Mandatory use of the mask in areas of high concentration of people such as military camps, social solidarity structures and accommodation facilities for refugees and migrants.

In addition, the mandatory use of the mask in closed public spaces is extended, while its use in open spaces is strongly recommended, when it is not possible to observe the necessary distances.

It becomes mandatory to carry out molecular control tests on workers returning from vacations in areas of high presence of people (military camps, social structures and refugee-migrants facilities.)

The new measure has immediate effect (August 14) and its implementation is scheduled until August 24.

IT is recommended  to apply the measure of teleworking or back office employment until August 31, for employees in the private and public sector who belong to groups at increased risk of disease.

The restrictions imposed on the island of Poros are extended until August 24. Restaurants, and bars are to close at midnight and not at 11 pm as originally.

New restrictions for the islands of Paros and Antiparos

Suspension of all events

Prohibited are gatherings with over 9 people

Use of mask in all open and closed spaced.

According to local media pariananea, the restrictions go into force at 6 a.m. August 15 and are valid until August 24, 2020.