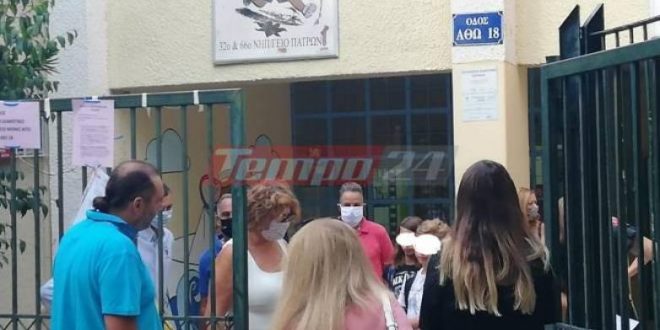 Schools throughout Greece opened on Monday in completely different conditions than all previous years due to the coronavirus pandemic: face masks for students and teachers, antiseptics and social distancing where possible. The rules from the Education Ministry are clear: no pupil will be allowed in the class-room without a face mask. The child will be sent home and be marked as “absent.” The overwhelming majority of parents and their children complied with the new rules. However, some parents, mask-deniers, went to school with or even without their children just to protest the rule. From Athens to Thessaloniki, and from Patras to Crete, the Covidiot-parents went to schools just for the sake to “spread the word,” so to say.

While children do not seem to have problems with the masks, it is the parents who have following pseudo-scientific claims and conspiracy theories They are possibly also afraid that their children will receive the education they did not.

A mother in Kordelio, Thessaloniki, is filmed quarreling with her teenager son who wants to wear the mask and go to school. She claims that the mask would cause him health problems and asks him to throw it away. “I don’t want this whorehouse,” she is heard saying among others. She then went into the school to ask the principal for an explanation for the compulsory use of mask.

Note: the poor boy is wearing a T-shirt with a NASA logo, probably in an effort to send a coded message that his mother is an alien [comment on the YouTube video].

Another girl in the same school was reportedly sent home after she refused to wear a mask.

A mother of 5 children told  ANT1 that she needed “written assurance by epidemiologists that her children will not suffer health problems due to the masks.” She held in her hand four-page long “responsible statements,” which she demanded that the teachers sign, taking responsibility for what may arise in her children from the obligatory use of the mask.

In the 55th Primary School of Patras, 4 children were sent home, after their Cvidiot-parents did not allow them to wear the face protection. The parents said that they will continue this “reaction” tactic, every day, because they do not believe what epidemiologists say.

A father complained to media that his 9-year-old children are deprived of the “first day at school and agiasmos (the blessing by a priest). He claimed that if there was a pandemic, “we would all have collapsed by now.” 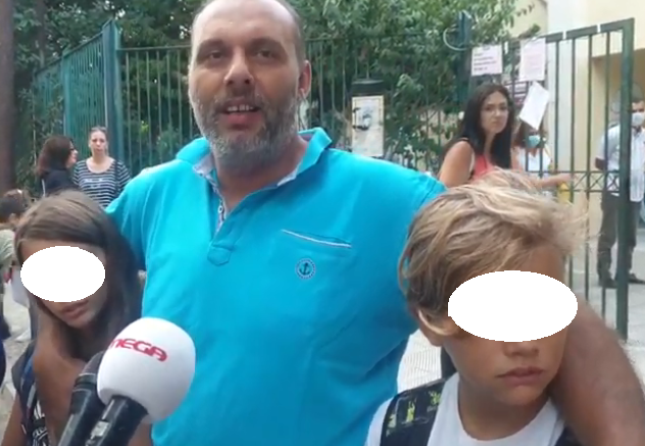 Another father said “if necessary, my children will not attend classes for a year. We’ll wait to see what symptoms the other children developed from wearing a mask.”

A small group of parents in Heraklio, Crete, did not allow their children to enter the classrooms due to the masks.  According to cretapost, the group went to the primary school of Gournes without their children (who knows, maybe their children were inside the school wearing masks!). They were holding medical masks on which they had written various protest messages such as “Muzzle on Free Speech” and “Παιδομάζωμα” -mass abduction of children – Get Ready.” 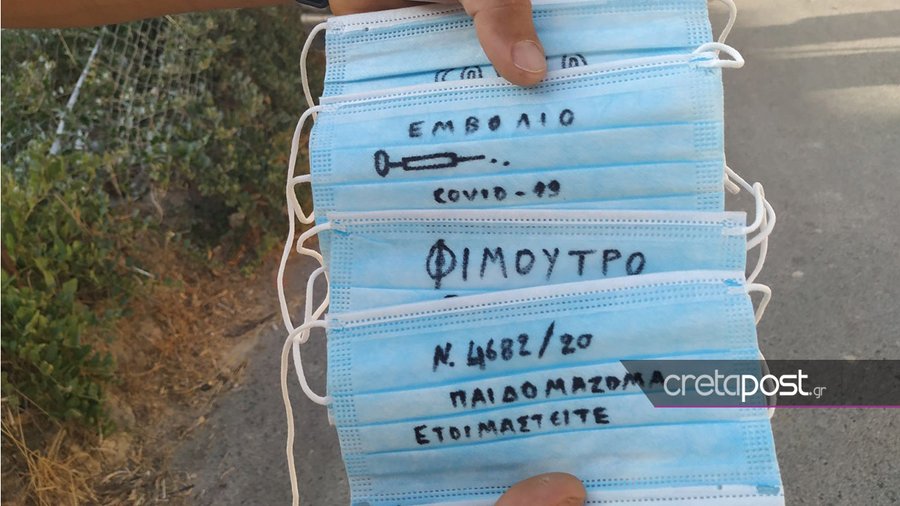 They said that they will keep their children at home if the mask rule in schools won’t change.

The latest conspiracy theory circulating on Greek Facebook claims that “a military camp is built in northern Greece, to host CHILDREN WITH SYMPTOMS FROM ALL OVER THE COUNTRY.”

It is interesting that these Covidiot-parents mobilize against the mask instead for the improvement of education and conditions in schools.

The teacher’s union on Crete said on Monday that there is 4,000 staff shortage in primary education schools across the country. They draw attention to the fact that among the teachers, several belong to “vulnerable groups.” 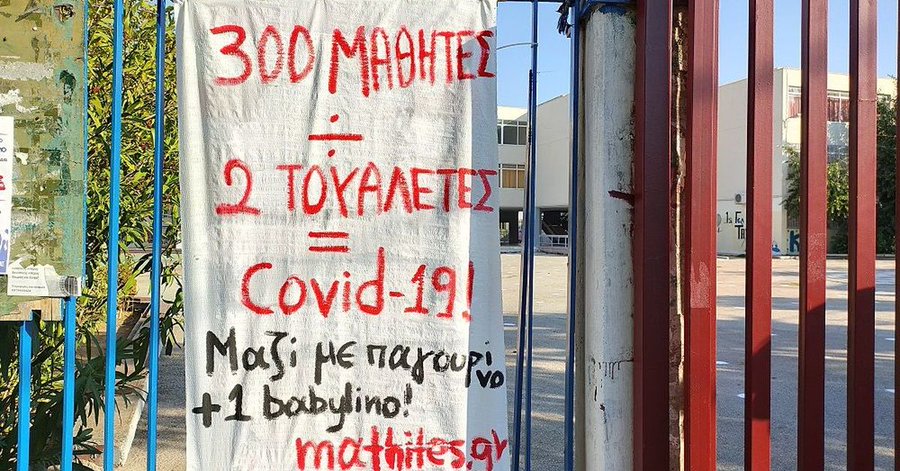 In a school in Tavros, south Athens, students hanged a banner saying “Two toilets for 300 students.” They ask the Education ministry together with the water flask to distribute also “one baby diaper.”

Parents are reportedly concerned that “25 student per class-room is too high for the times of the pandemic.

Teachers and parents are also concerned about the shortage of cleaning personnel.

PS It was parents with far-right background who organized the protests against the masks in schools in the past two Sunday, media reported.

These useful Covidiots are again out there, on the streets, to distract from the real problems.

Who has forgotten the far-rightists who raised Migration as the “number 1 problem” in Greece after 2012, while the Greek society was struggling and gasping under the strict austerity imposed by the country’s lenders and the Troika. That was the real problem back then.

And again, the real problem are the thousands of businesses and workers affected by the economic impact of the pandemic. But their problem is a piece of cloth.