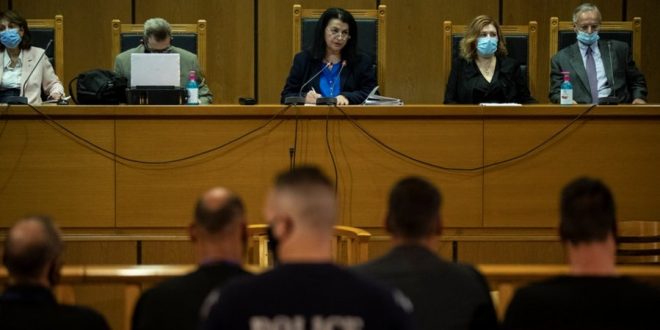 The whole leadership of the neo-nazi Golden Dawn will go straight to jail, the Appeals Court in Athens ruled on Thursday. In  its historic decision, the Court moved in total opposite direction of the prosecutor’s recommendations for suspended sentences and decided that 38 out of 50 GD convicts will not receive suspended sentences until their cases are examined in a higher instance.

The ruling on Thursday is even more severe than expected as straight to jail go not only those sentenced to over 10 years imprisonment but also those who received 5 or 7 years.

Suspended sentences until their appeal received 12 convicts among them 5 former MPs, among them the wife of GD leader,  for participation in “criminal organization.

Five ex MPs, including Michaloliakos’ wife Eleni Zaroulia received suspended sentences until the appeal, thus with the  imposition of restrictive conditions such as ban on leaving the country, the mandatory appearance twice a month at the police station and a bail  of 20,000 for each one.

14 accomplices of Pavlos Fyssas’ murderer Giorgos Roupakias are also to be taken to prison, and so will two of leading members of the GD branch in Nikaia.

7 GD members were released on restrictive conditions ban on leaving the country, the compulsory appearance at the police station twice a month.

Following the court ruling, three Golden Dawn convicts handed themselves to police. These are the former No 2, Kassidiaris, one of the Nikaia branch leaders and Tsakanikas.

Kassidiaris did not miss the opportunity for a show saying that he is proud of his ideas. 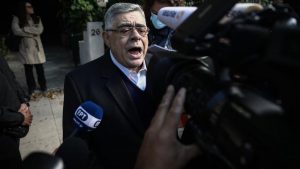 Similarly, the little “fuhrer” Michaloliakos has reportedly said that he is imprisoned for his ideas. He spoke of a “dirty junta in politics, justice and media.” He came out of his home accompanied by his wife and daughter (also a GD member) , made a statement and returned home without surrendering himself to police. His arrest is imminent.

Two hours after the court ruling, a total of 10 convicts have surrendered themselves to police. Those who do not will be arrested.

The arrest of Lagos is an issue as he left for Brussels after his conviction last week protected by his MEP immunity.