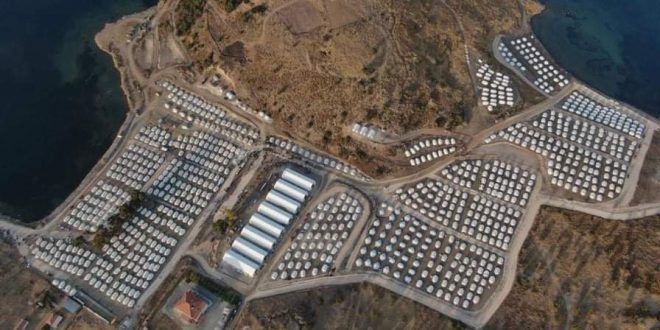 Greek Migration and Asylum Minister Notis Mitarakis and European Commissioner for Home Affairs Ylva Johansson signed a memorandum of cooperation for the construction of a new reception centre for migrants and refugees on the island of Lesvos.

The new reception centre will be built with the cooperation of the Greek authorities, the European Commission and EU agencies (EASO, FRONTEX, EUROPOL, FRA).

According to a migration ministry announcement, the center “will meet all European standards, have modern and durable infrastructure, provide full medical care and take into account the needs of women, children and families.”

Accommodation in the facility will be short duration -up to a few months – until a decision either rejecting or approving requests for asylum is issued.

Funds and expertise are to be provided by the European Commission, which will work closely with the Greek authorities for the joint supervision and surveillance of the project’s management.

The Greek authorities and the European Commission will cooperate on all the key strategic issues involved in the centre’s construction and the implementaion of the progamme.

The memorandum does not affect the Greek authorities’ responsibility for the planning, construction and management of the new facility, nor for making decisions on whether to grant asylum or to return asylum-seekers, nor for any other decision relating to public order , public health or national security.

Minister Mitarakis stated that the construction of the “new closed and controlled facility on Lesvos will allow to permanently shut down the temporary facility at Mavrovouni, while it will act as a guide for similar centres on other Aegean islands.”

*thumbnail picture is the provisional camp after the Moria fire.

PS I recall that the Greek gov’t plan was that the majority of the refugees and migrants would have relocated from the temporary facility by end of the year – this year….