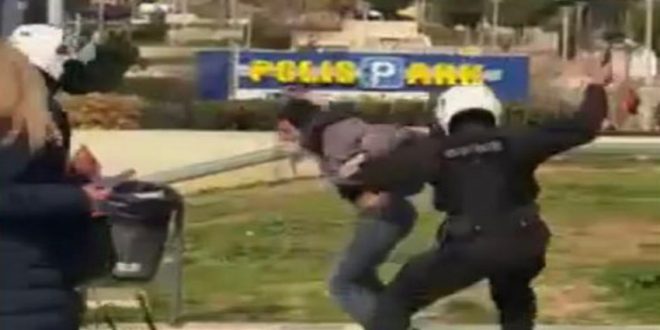 Athens Public prosecutor and Greek Police investigate at least two police officers who beat a citizen during routine lockdown checks in Nea Smyrni suburb of south Athens on Sunday. With a lukewarm statement, Minister for Citizen Protection Michalis Chrysohoidis said that “unwarranted violence is not justified, we are absolute in it.” He added that the Citizens Ombudsman was informed about the beating of the citizen.

Referring to the internal administrative investigation Chrysochoidis said that “the investigation will be completed soon, in order to highlight and assign disciplinary and criminal responsibilities.”

Next to Police administrative inquiry probe against the officer, the head of the Athens Prosecutor’s Office, Sotiria Papageorgakopoulou, ordered on Monday a preliminary investigation into reports of police misconduct.

Police said on Sunday that it was attacked by “30 people” but so far it has been not able to confirm this. On Monday, the official government through several ministers said that it was “40 people.”

Videos shot by bystanders showed in contrast, a young man talking calmly with police officers when a third one approached him and started brutally beating him with a baton.

The young man had reportedly protested when police officers were terrorizing two women with children during routine lockdown checks.

While the government still tried to justify the beating by insisting on the “attack version” and defaming and discrediting the victim thus publicly given his name, some police officers are clearly disturbed by the incident. The Union general secretary pointed out that the steel expandable baton used against the young man is illegal.

Spilios Kriketos general secretary of the Police Union in Attica told  Mega TV : “I don’t care what preceded, I’m not interested, it insults and shames all police officers. It is not our mission to be like that. These are not pictures of the Police but of vagrancy. The baton is a metal one and this is illegal.”

He stressed that the citizen should feel ‘safety’ when he sees policemen “not horror.”

In a statement a police union fraction denounced that the “excessive and unnecessary police violence in the last days due due to orders from above.”

The incident has triggered not only an outrage among citizens but , of course, also a political one with opposition parties SYRIZA, KINAL/PASOK, KKE and MeRA25 to speak of “police repression.”