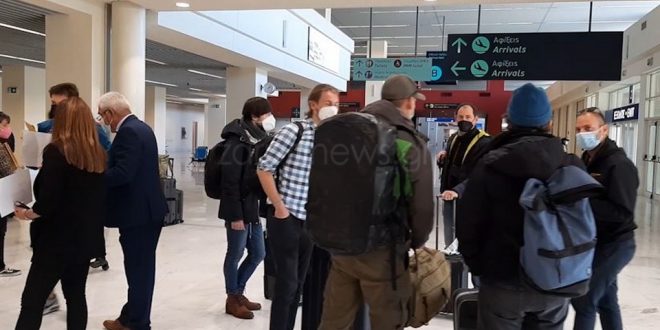 The tourism season is to start officially on May 14, however, the first tourists already arrived in Greece and thus on Crete already on the last weekend of March. Several regular flights from Germany landed in Heraklio and Chania over the weekend.

35 tourists arrived from Brandenburg and another 20 from Berlin in Chania.

15 of the tourists are reportedly to take part in a Germany reality TV show called “finding Prince Charming”, while the rest came just for holidays and will stay in various areas around Apokoronas and Kissamos. Some have interest to purchase real estate, the state broadcaster ERT  reported.

Prior to their arrival on the island, the tourists had a PCR test that was apparently negative and had filled all necessary information.

Some of them spoke to local media zarpanews and said that they had not been vaccinated. Regarding the pandemic, they said they felt safer on Crete than in Berlin.

The arrival of the German tourists coincides with the Easter of the Catholic Church.

At the same time, German Lufthansa has increased its flights to the airport of Heraklio over the weekend with 5 scheduled flights in total that arrived from Frankfurt, Munich and Hannover. There will be two flights from Munich and Frankfurt for Crete per day, local media neakriti reported.

Beginning of April, the route Amsterdam-Heraklio of Transavia is expected to be launched.

Τhe tourists’ arrival on Crete was broadly broadcast in the country that is under nationwide lockdown with several regional units and municipalities including some on Crete to be in tougher restrictions due to coronavirus infections. Schools are closed and so are restaurants, cafes and bars, retail stores and seasonal hotels.

Greeks lashed out on social media and accused the government of “double standards”. Some even suggested to be dressed like German tourists in order to visit their families in a village or another town, parents and children they haven’t seen since last November.

Apparently following the outcry, mainstream media report on Monday, that epidemiologists will most likely decide for the gradual lifting of the lockdown as of the end of the week.

Tourism Minister Haris Theoharis said on Sunday that tourists will be allowed to arrive in the country before May 14, “even in April”, as part of a “pilot program.”

Τhe number of Covid-19 hospital admissions and intubations decreased in the week of January 23-29, …