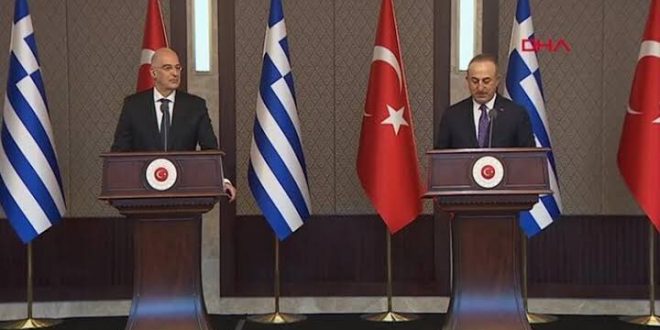 For the first time in Turkey a foreign diplomat and thus the Greek Foreign Minister did not mince his words and told Ankara what its neighbor think of a series of illegal actions and claims. The joint statements of guest Greek FM Nikos Dendias and host Turkish FM Mevlut Cavusoglu transmitted live on TV turned into a bras-de-fer aside all diplomatic protocol, the vague and empty commitments, the pleasantry and the usual niceness.

What began with hopes of improved relations quickly descended into acrimonious accusations from both sides. 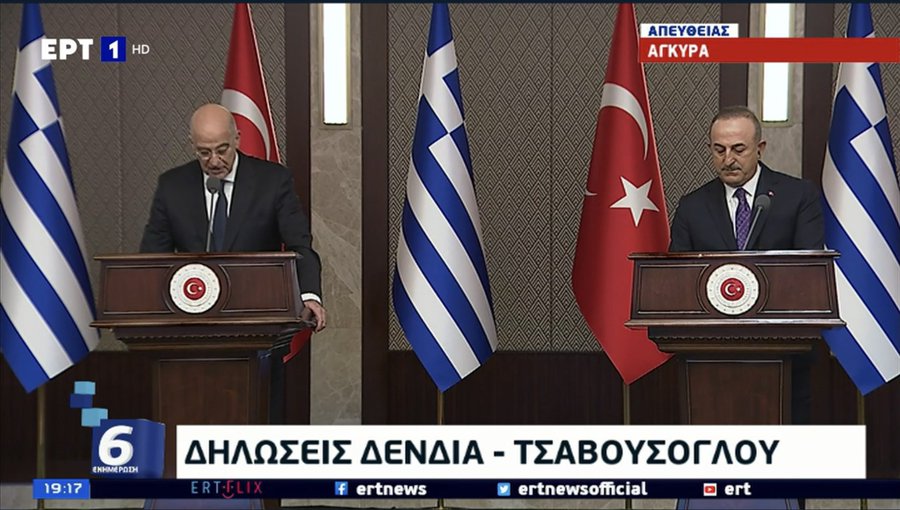 Dendias challenged live Cavusoglu by practically referring to all the bilateral differences by name: All the Turkish actions inclduing the air space violations in the area that are illegal, there is not Turkish but Muslim minority in Thrace according to the Treaty of Lasusanne, the Treaty cannot be revoked and demilitarization of the Greek islands cannot take place if Turkey had its army at the coast. 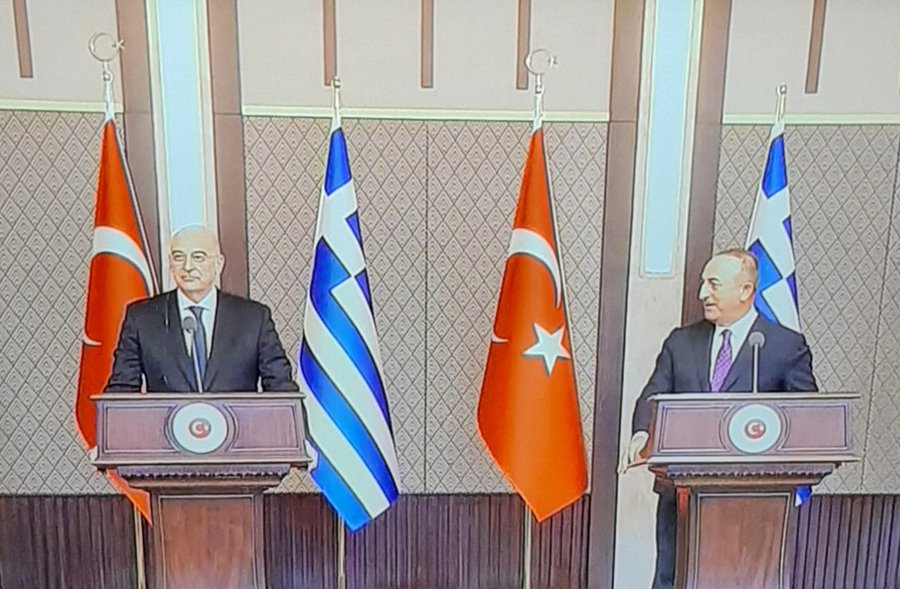 In his initial statement Cavusolgu kept the diplomatic tone and said “we believe that the issues between us can be resolved through a constructive dialogue, aggressive statements should be avoided.”

The Turkish Foreign Minister described the resumption of exploratory contacts as “very important” and announced that Erdogan was proposing a meeting on the Eastern Mediterranean issue.

Ηe made reference to all issues important for Turkey such the Cyprus, terrorism, migration, “Turkish” minority in Thrace, preservation of Ottoman heritage in Greece, and the European Union.

“To resolve our differences, we believe that we must continue the dialogue that you started today with your visit,” Cavusoglu said addressing Dendias.

Dendias expressed support for Turkey’s bid to join the European Union but said any violations of Greece’s sovereignty would be sanctioned.

His comments prompted an angry response from Cavusoglu who described them as “unacceptable”, prompting Dendias to say he was surprised Cavusoglu had not expected him to act as if nothing had happened in the Aegean and eastern Mediterranean.

“A necessary condition for the improvement of bilateral relations is de-escalation and the avoidance of actions. A few months ago the offenses had increased significantly,” Dendias said.

Among others he stressed:

There is a Muslim minority in Greece, it is recognized by the Treaty of Lausanne, this is the view of the Greek state. There are statements that do not help the positive climate that we have agreed to promote.

The only solution that is accepted by the entire international community is the bi-zonal-bi-communal federation in Cyprus. There must be an abstention from actions that violate the rights of the Republic of Cyprus.

Greece supports Turkey’s accession process, as long as Turkey wants it. As in any candidate country, there is an inviolable rule: respect for the territorial sovereignty of a Member State.

The possibility of sactions is always on the table if there is an infringement to the detriment of the territorial sovereignty of a Member State.

An issue that negatively affects bilateral relations and that concerns the threat of war in the event that Greece implements the UNCLOS provisions. Give up the casus belli for 12 miles. This law is part of the European acquis.

The so-called Turkish-Libyan memorandum has been condemned by the European Council because it is not in line with the law of the sea.

Cavusoglu responded said that “differences remain” between the two sides over the Aegean and energy rights in the Eastern Mediterranean and defended Turkey’s seismic surveys as “entirely legal.”

The Turkish foreign minister reiterated calls for the demilitarization of several Greek islands in the Aegean, saying in response to comments by Dendias about violations of the Treaty of Lausanne that “you only bring up what suits you.”

“If you heavily accuse my country and people before the press, I have to be in a position to respond to that,” Cavusoglu replied. “If you want to continue our tensions, we can. If we go into mutual recriminations here, we have a lot to tell each other.”

In the end, the Greek FM invited his Turkish counterpart to Athens and to prepare a meeting between Prime minister Kyriakos Mitsotakis with the Turkish President.

Earlier, Dendias was received by Recep Tayyip Erdogan following an invitation by the latter.

After the tense fight on live presser, both delegations shared an iftar dinner and the Greek Foreign Minister returned to Athens as a “hero” and “the next Prime Minister of Greece” – if one reads Greeks’ posts on Twitter.