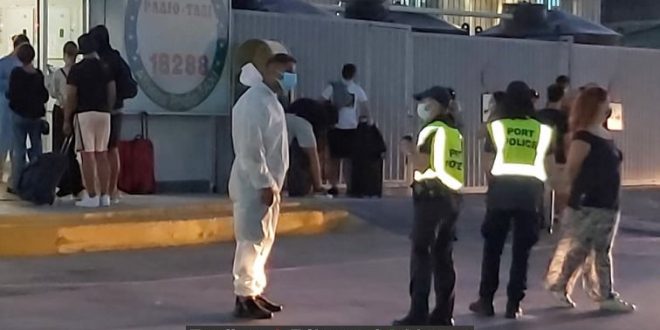 July 8, 2021 CORONAVIRUS Comments Off on Authorities on alert as dozens of youth on board of ferry with Covid-symptoms 4,040 Views

Dozens of Covid-suspected cases on board of a commercial ferry set health authorities on alert late on Wednesday and had mobile teams of health organization EODY hastily being deployed in order to carry out Rapid tests to those disembarking.

Ferry Super Express returned from the island of Ios to the port of Rafina in eastern Attica at 20:30 in the evening with over 70 people on board. The passengers were mostly young people who had suspicious symptoms, local media report.

A group of 30 people told the website rafinarpgr that they were on the islands of Ios for a short vacation. There they met with other groups of young people and they all participated to a big party.

Some of them developed symptoms of Covid-19 and had to remain on Ios, as they were not allowed to go on board and return to Rafina.

The rest were quarantined inside the ferry, where mobile teams of EODY rushed to carry out the relevant tests.

Concerned parents of the young people had also rushed to the port.

Health Minister Vassilis Kikilias confirmed the incident and said that the average age of those tested positive was 17 years old.

According to state broadcaster ERT, at least 12 people were in quarantine on Ios.

The ferry that operates the route Thira, Ios, Paros, Naxos, Mykonos, Tinos docked at Rafina with 369 passengers and 28 crew members.

The Super Express was disinfected by a special team and workshop and left for its standard route at 08:05, instead of the scheduled 07:05.

A mobile health team is traveling to Ios due to an infections increase in the last days, ANT1 TV reported early Thursday afternoon.