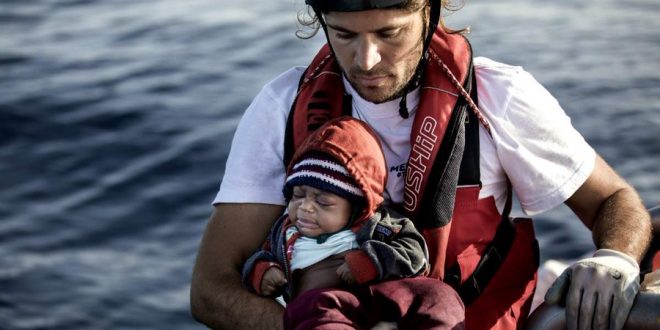 The Greek Presidency had officially announced that rescuer Iasonas Apostolopoulos was among those citizens to be decorated for their actions on the occasion the 47. restoration of democracy on Saturday. However, Apostolopoulos’ decoration was cancelled without any justification apparently following political pressure by some members of ruling party New Democracy.

Rescuer Apostolopoulos was to be awarded the Order of the Phoenix for his internationally acknowledged and honored humanitarian work rescuing refugees and migrants on the Aegean and the Mediterranean as a member of Mediterranea Saving Humans and the Mare Jono and Alex vessels.

It was the Foreign Ministry that called him midnight Friday to inform him that because of “new circumstances” he doesn’t qualify for the medal.

He wasn’t told what these circumstances were, Apostolopoulos told tvxs.gr. He said further that he had first received a phone call frome the President’s office informing him on his upcoming decoration.

Citing sources from the Presidency, newspaper efimerida ton syntakon (efsyn) noted that it was the Foreign Ministry that proposed him for decoration removed him from the list, while other media reported that the Ministry had originally approved the list of citizens to be decorated, a list complied by the Presidency.

According to efsyn, the cancellation was because he had criticized pushbacks and the migration policy of the European Union.

Before the cancellation, though, an MP from ND had announced it on social media noting “what was needed has been done” and called Apostolopoulos an “aggressive detractor” of the country’s border protection policy.

The story is embarrassing for the office of the President of the Hellenic Republic and Katerina Sakellaropoulou who is supposed to be above party lines.