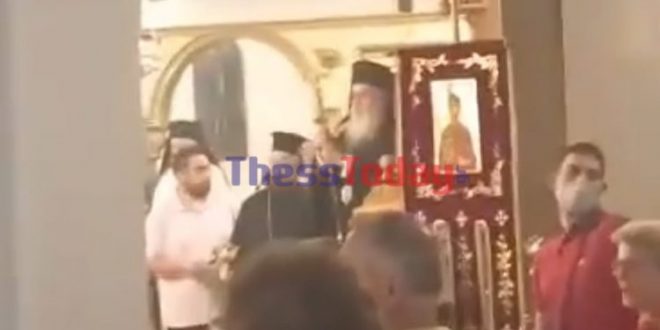 Anti-vaxxers in Greece have found a new way to make their attitude heard: they have started to verbally attack priests when the latter speak to congregation in favor of vaccinations against Covid-19. In just two days, two incidents occurred in Zakynthos and Thessaloniki where anti-vaxxers protested the priest shouting Shame!

At the Church Agia Paraskevi in ​​Neapolis, Thessaloniki, when the local Bishop was confronted with an uproar when he urged the faithful to protect their own health and the one of their beloved ones and get vaccinated against the coronavirus.

Some people started to shout “shame” and “shame on you,” and they even booed the high-ranking clergyman. Tension prevailed and some left in outrage.

The Bishop referred among others to his capacity as president of the nursing home in order to stress the need to safeguard the health of the elderly, however, the voices of the anti-vaccinators who protested and cheered prevailed were louder

Inside the church many people did not wear masks or wore them under the chin, notes thesstoday. Note that masks are a must in closed spaces.

A day earlier a similar incident took place during the festive service for Agios Panteleimonas in Pigadakia on the island of Zakynthos.

The local priest was speaking in favor of vaccines against the pandemic when a young man allegedly in outrage started shouting at him “shame” and “shame on you!”

Another group of anti-vaxxers have gathered outside a church in Patras on Wednesday evening and chanted religious hymns as a form of protest against the vaccines.

So far it is unclear who is organizing these protests in churches where the majority of clergy has apparently complied with the binding circular by the Church of Greece that they promote the vaccination program.

Yet there are still clergymen directly from the Middle Ages who oppose the vaccines and the masks claiming they they muzzle the faith, and that with the vaccines the Satan gets access to the faithful.

Meanwhile in Greek capital Athens, anti-vaxxers gathered again at Syntagma Square opposite the Parliament to protest any government decision and measure against the pandemic.

At a vaccines protest rally in Thessaloniki demonstrators also chanted slogans that have nothing to do neither with pandemic nor with the vaccines but with the nationalistic front. They reportedly chanted: “Macedonia is Greek,” and “Homland – Religion – Freedom.”

PS Soon the anti-vaxxers protests in the country turn into an anti-whatever -protest of the religious-nationalist front that instrumentalizes the pandemic for its own purposes.