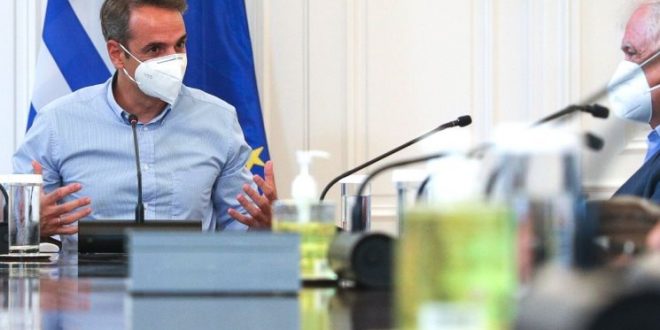 In good mood and relaxed Prime Minister Kyriakos Mitsotakis appeared on TV screens on Wednesday with a plan for the reconstruction of the fire-stricken Evia. With new age slogans “holistic approach” the PM urged the fire-stricken people of Evia to cooperate with the state with “positive energy.” He promised to “rebuild northern Evia better and more beautiful than it was.”

“And through this great catastrophe, what I hold back is this optimism of many people in Northern Evia, who rushed to take control of the situation in their hands. With the help of the state, with the support of the state, we will rebuild northern Evia better and more beautiful than it was,” the Prime Minister said among others.

The government will disburse the first payouts for people whose homes and businesses were damaged in the great fire of North Evia within the next few days, the PM said H announced, the emergency aid being disbursed as a loan will now be without obligation of return, whether a business is fire affected or not.

Mitsotakis said that the government was focusing on the wildfire in North Evia compared to other large fires in the Peloponnese and north of Athens because the wildfire in Evia damaged the area’s entire production model.

He also stressed that the immediate priority is to clear the area and stabilize the soil: “We are moving ahead with the removal of burned trees and with infrastructural works, to retain the soil in place – first in order to prevent floods, and then to guarantee that reforestation will be assumed under the best terms possible.”

The PM added that “we must begin now to plan for the future of North Evia through a holistic approach, using its significant comparative advantages and thinking outside the box.”

Mitsotakis called for collaboration of the local governments and the population.

Next to ministers assigned with the reconstruction “but local agencies are also involved – the Region, and the two townships that have been harmed the most. They will speak with us, point us on the way, direct us, and contribute their thoughts,” Mitsotakis said, adding that none of this could succeed without the positive energy of the same people who were affected by the fires.

The PM introduced Stavros Benos, a former PASOK minister, now assigned with the reconstruction of Northern Evia, On his part, the 73-year-old Benos outlined the direction of the committee’s work to help Evia reconstruct its economy and develop it.

Ιn just three days since his appointment Benos managed the unmanageable: He presented  7  studies for the reconstruction of northern Evia:

– special urban plans
– master plan for a new forest
– transportation studies for critical infrastructure and networks
– study of the human resources and the future of labor
– study for agrinutrition
– study of a new tourism identity
– study for a green zone, a digital wave, and an innovation space

PS The usual mean Greeks criticized the Prime Minister  for being relaxed and in good mood while a forest fire was raging for the 3rd day right next door Athens in Vilia and that he wants to “rebuild” Evia when the majority of destruction affected forest and agricultural land, livestock and wildlife.

BTW: “holistic approach” was a term used also by the IMF and Christine Lagard in the “good old times” of bailout agreements. Only God knows of the PM’s neo-liberal plans for northern Evia….