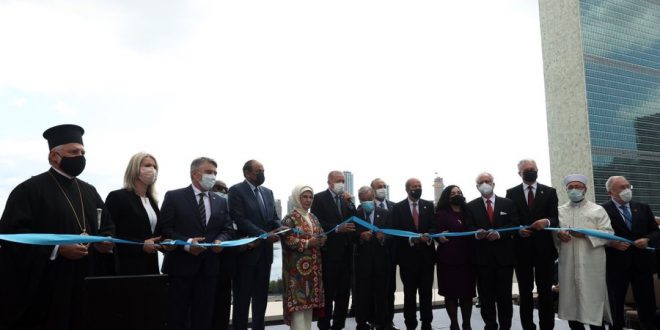 Τhe presence of the Archbishop of America Elpidoforos at the opening of the Turkish House in New York a few days ago has irked the Greek government, angered the diaspora Greeks in America and had Cypriots fuming. The Archbishop was present at the inauguration of the Turkevi Center that will house the Turkish representation to the United Nations as well as delegates from the illegally Turkish-occupied north of Cyprus. Turkish President Recep Tayyip Erdogan cut the inauguration ribbon, present was also the leader of the illegally occupied Cyprus North. The invitation was rejected by the diplomatic representatives of Greece and Cyprus.

I congratulated Pres. Erdogan on the opening of the Turkevi Center, together with UN SG Guterres. As always I insist on the importance of the Ecumenical Patriarchate, the re-opening of the Halki Theological School, and supporting the rights of religious minorities of Turkey.

“We were irritated by the actions of the Archbishop. The Greek government expresses its displeasure,” government spokesperson Yiannis Oikonomou said during the regular briefing on Thursday noon.

Thursday evening, the Prime Minister, currently in New York, went so far to cancel a tour through Ground Zero where he was supposed to be guided through by the Archbishop.

According to state-run news agency amna the Prime Minister will not go to Ground Zeroon Friday morning “as a meeting with the editorial team of Wall Street Journal was added” on his schedule.

While the Greek opposition parties SYRIZA and KINAL/PASOk criticized the government for its stance, criticism came also by New Democracy MP Dora Bakoyianni who is also Mitsotakis’ sister.

“However, Archbishop Elpidophoros is neither deputy minister of Mitsotakis nor does he works for the PM’s family,” Katrougalos said.

Adding that “there are cases where criticism should be leveled at the actions of the Church, when its action overlap with politics” the former deputy FM said he does not considers the case as problematic when officials of the Ecumenical Patriarchate meet with representatives of the Turkish State, in order to promote the religious interests of Orthodoxy or for similar spiritual matters.”

He added that the presence of the Archbishop of America together with the leader of the pseudo-state, Mr. Tatar, created a problem, but Mr. Elpidoforos explained that he was surprised by his presence and was not informed about it.”

Katrougalos stated that he considers as “imperative that the scheduled meeting of the Prime Minister with the Archbishop takes place, despite the reservations of the government spokesman. There, Mr. Mitsotakis will have the opportunity to criticize, as he estimates, but also in the way he deserves. “Otherwise, the damage from the government’s outspoken statements will be even greater.”

Recalling that the Archdiocese of America belongs to the Ecumenical Patriarchate, xx FM Evangellos Venizelos described the government position as “myopic” and argued that “the public political criticism of the Ecumenical Patriarchate by the Greek government because it has — for reasons of protection of its ecclesiastical position and religious freedom — the de facto obligation to seek relations of mutual respect with the Turkish authorities, is myopic.

“Instead of taking easy and popular anti-Turkish shots using the Ecumenical Patriarchate, it would be preferable for the Greek and Cypriot governments to highlight the outstanding problems raised by the statement of the Patriarchate representative at the New York ceremony,” he added.

MP Dora Bakogiannis posted on Twitter: “We should not forget that Elpidophoros represents the Ecumenical Patriarchate that is based in Poli [Istanbul] and that archbishops are Turkish citizens. Therefore the Patriarchate has to keep some balances.”

PS A missed opportunity for the PM to clarify the issue with the Archbishop.Sadly, Mitsotakis’s stance shows weakness and insecurity, shortage in communication skills, absence of political vision and the ability to see beyond his own nose. It makes absolute no sense for a Greek PM to break ties neither with the Archbishop of America nor with the Ecumenical Patriarchate, as only Turkey will take advantage of such a rift.