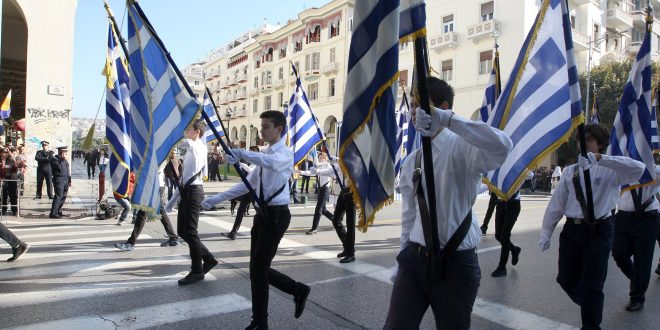 Parade and celebrations for Thessaloniki patron to be held as usual

October 4, 2021 CORONAVIRUS, FEATURED Comments Off on Parade and celebrations for Thessaloniki patron to be held as usual 409 Views

The parade on Oxi Day, October 28 in Thessaloniki and the celebrations for the patron of the city, Agios Dimitrios will ne held as usually, Interior Minister, Makis Voridis, told state broadcaster ERT on Monday. He added that the parade will take place in the presence of all citizens, not just the vaccinated ones,

The minister noted that the parade will be held in compliance with the health protection measures and a strong recommendation for the use of the mask.

He also added that the celebrations in Thessaloniki for Agios Dimitrios will be held normally.

Relevant announcements are expected to be made within the next 24 hours.

“We have the opening of most activities. Obviously, this is done with some restrictions. It is not possible to say that we will allow only the parade,” Voridis stressed.

President of the Panhellenic Medical Association, Athanasios Exadaktylos, said that the parade decision was “right.” Speaking also to ERT, Exadaktylos recalled that the parade on March 25 was held as scheduled despite that the country was in the peak of the pandemic.

“Cancelling the parade on October 28 would be wrong as it would divide the society,” he added.
Note that health authorities placed the regional unit of Thessaloniki in “mini lockdown” on October 1 due to increased epidemiological load.
Last year, the celebrations for the patron of Thessaloniki Agios Dimitrios turned into a super-spreader event sending dozens to intensive care units and some bishops also to grave.
Some doctors disagree withe the decision on the parade and the celebrations for the patron.
*thumbnail picture: archive