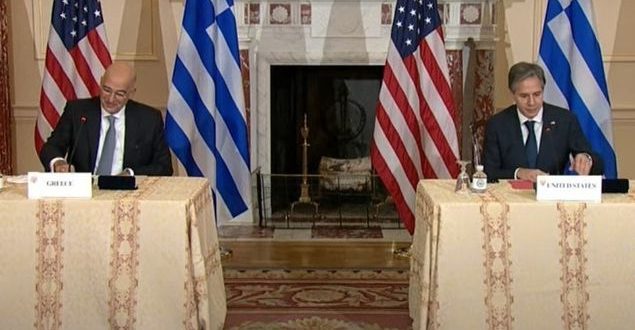 Greek Foreign Ministry Nikos Dendias and US State Secretary Antony Blinken signed the five-year upgraded renewal of the Mutual Defense and Cooperation Agreement (MDCA) between Greece and USA on Thursday.

The two ministers signed the MDCA in a special ceremony at the Benjamin Franklin diplomatic reception room in the Harry S. Truman Federal Building, at the headquarters of the Department of State.

Outlining the multitudinous aspects of the relationship between Greece and the United States, Denidas posted on his Twitter account that the modification of the Agreement secures the Greek interests and creates a protection shield for our country.

At his opening remaks, he said that “Greece is committed to resolve disputes with diplomacy and always in accordance to international law.

He pointed out, however, the fact that Greece “faces daily provocation and is threatened with war” if it exercises its sovereign rights.

Dendias also spoke of the strong ties Greece has developed with other countries in the region, including Israel and the United Arab Emirates and noted the importance of West Balkan integration.

“We believe that together, Greece and the United States, can become an even more powerful force for peace, prosperity, and human dignity,” said Blinken, reaffirming the commitment of the US to deepen the partnership between the two countries.

“This dialogue is an example of how close the friendship is between our countries and how much we value each other.” He described Greece as “a pillar of stability in the region” and expressed his gratitude to Greece for being a strong and reliable ally.

The MDCA will boost defense cooperation between the two countries, including further investment in the four bases operated by the US military in Greece.

The Greek government plans to submit the new deal to Parliament for ratification next week, as the time frame is relatively tight, with the current agreement expiring on November 6.