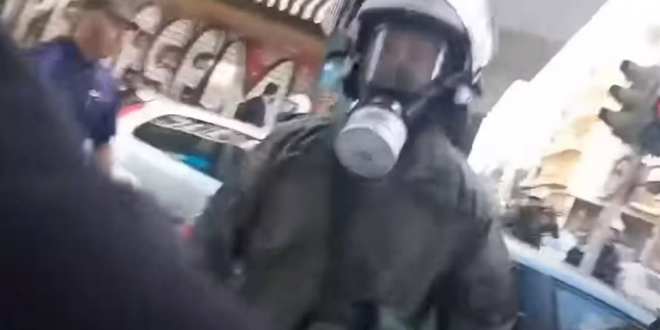 Video footage show an riot police officer in full gear running into a shop’s window and smashing the glass with his fist and his club. He throws a baton with what it seems an ‘anarchists’ flag.”. Inside the shop are the terrified staff and customers who shout in fear calling him to stop. One of them is filming the scene. Another asks the policeman “Are you crazy?” and he responds “I’m crazy, yes.”

A woman has been injured in the hand form the broken glasses.

Video: At some point, the officer looks left and right apparently to see if somebody is watching him or filming him.

Another video shot earlier showing riot police beating civilians and in the end also the specific riot-man running into the shop and smashing the window practically for no reason.

The unprecedented act of deliberate police violence took place in Exarchia during a small demonstration in downtown Athens on Tuesday, October 26.

“The actions by some police officers as the video shows are causing a lot of concern,” notes newspaper ethnos adding that the Greek Police has not commented on the footage so far.

Citing sources from the Ministry for Citizen Protection cnngreece reports that the incident is being investigating.