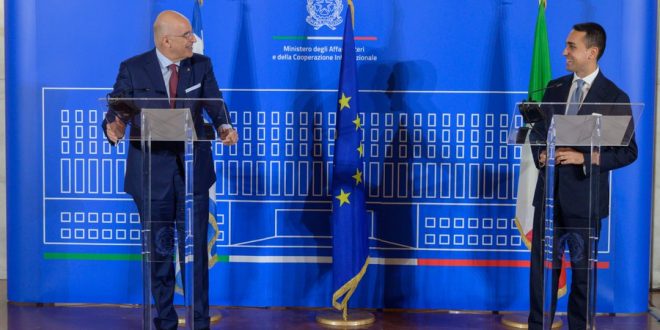 Greece and Italy completed on Monday the approval of a maritime borders agreement delimiting an exclusive economic zone (EEZ) between the two countries.

Greek Foreign Minister Nikos Dendias and his Italian counterpart Luigi Di Maio met in Rome on Monday to exchange the so-called “instruments of ratification’, a procedure whereby each country gives notice to the other that it has completed its domestic constitutional process for approval and implementation of the deal.

The agreement, signed in June 2020 in Athens, is an extension of a 1977 accord, which paves the way for Greece and Italy to explore for and exploit marine resources.

In joint statements after the exchange that allows the implementation of the agreement to begin, Dendias said

“This symbolic act is exceptionally significant. It concludes an issue that had been outstanding for 45 years and demonstrates our exemplary relations with Italy, both within the EU … and on a bilateral level. We have close ties that cover the entire range: trade, investments, as Italy has one of the most important positions in the Greek market. We have achieved a great deal but we can achieve even more, in sectors such as tourism, culture and education where we work together closely.”

Dendias noted that cooperation between Greece and Italy was “not news” but “what ought to happen between two neighbouring friendly countries,” and that the exchange of instruments also demonstrated the two countries’ respect for international law, especially the United Nations Convention on the Law of the Sea (UNCLOS).

Commenting on Turkey’s actions and provocativeness, Dendias said that he had informed his Italian counterpart that Turkey was continuing its unlawful actions in the Eastern Mediterranean and flouting fundamental principles of international law. “It is continuing to make threats against Greece. The casus belli, the threat of war against Greece continues to apply for Turkey. It is the only country in the world that has issued a threat of war against another country. It also issues threats against the Cyprus Republic. This is not something that concerns Greece and Cyprus only but the European Union family as a whole, including Italy,” Dendias added.

On his side, Di Maio said he and Dendias discussed a range of issues, from bilateral relations with neighboring southern countries, economic matters and energy issues.

He said the exchange of the instruments of ratification is “an act that signals the start of its effect at an international level.”

“It is a major success for both countries and very important for cooperation in the Mediterranean, which we wish to become an example and a point of reference for the future,” Di Maio said.

He added that “the bilateral visits and close contacts are proving the strong friendship and fruitful cooperation between our countries, which have excellent relations and close collaboration regarding the international dossiers, starting from the European agenda”.

Di Maio said that he reiterated to Dendias the importance of supporting the political process in Libya and the immediate withdrawal of mercenary troops and foreign fighters.