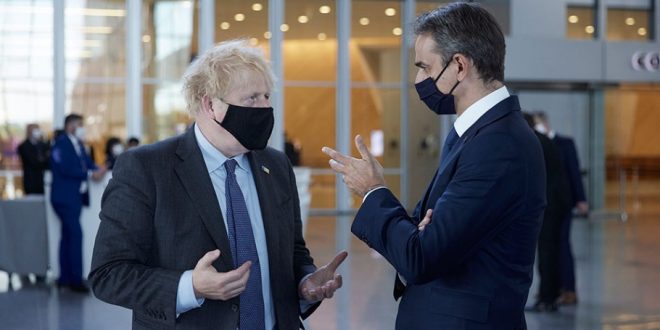 The entire spectrum of Greek-UK bilateral relations, from the significant prospects for deepening economic and trade ties and increasing investments, to the great margins for upgrading tourist traffic in 2022, the return and reunification of the Parthenon Marbles in Greece, the Cyprus issue and the resumption of Turkish aggression in the Eastern Mediterranean, are expected to be raised during a meeting between Prime Minister Kyriakos Mitsotakis and the Prime Minister of the United Kingdom, Boris Johnson, in London on Tuesday.

At a critical juncture, however, for the future of Euro-British relations, as a brawl between the European Commission and the British government on a number of outstanding issues (such as the Brexit trade agreements and the Northern Ireland Protocol) is underway, Mitsotakis is the first European leader to visit London this week.

Government sources place special emphasis on the economic-investment aspect of the Greek prime minister’s visit to the British capital. The Greek PM is expected to underline during his contacts in London the important prospects for the further development of economic and trade relations.

Talks will also focus on tourism, where there are high hopes regarding arrivals from the UK to Greece in 2022, provided that there are no restrictions due to Covid.

During his stay in London, Mitsotakis is expected to have meetings with important investors, representatives of the Confederation of British Industrialists, but also Greek community in London, which is very active in this area. [with amna]