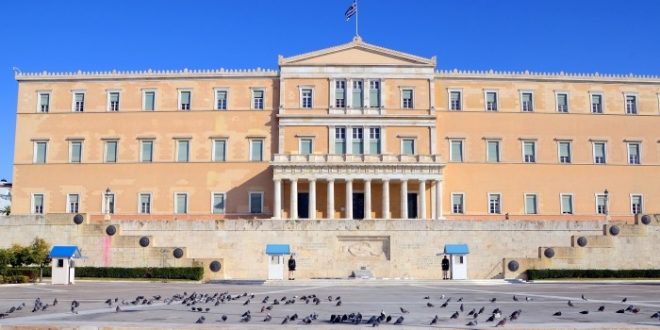 A criminal code provision that Greece’s parliament adopted on November 11, 2021, makes it a criminal offense to spread “fake news.” The new Law could lead to journalists being jailed. The Human Rights Watch calls on the Greek government to immediately move to revoke the provision, which is incompatible with freedom of expression and media freedom.

The amended criminal code makes it a criminal offense to spread fake news that is “capable of causing concern or fear to the public or undermining public confidence in the national economy, the country’s defense capacity or public health,” punishable with up to five years in prison.

The law was published in the Government Gazette on November 12, bringing it into effect. There is a serious risk that the provision could be used to punish media professionals, civil society, and anybody who criticizes or takes issue with government policies, creating a chilling effect on free speech and media freedom.

“In Greece, you now risk jail for speaking out on important issues of public interest, if the government claims it’s false,” said Eva Cossé, Greece researcher at Human Rights Watch. “The criminal sanctions risk making journalists and virtually anyone else afraid to report on or to debate important issues such as the handling of Covid-19 or migration or government economic policy.”

The new criminal measure comes at a time of rising concern about media freedom and the rule of law in Greece. In April, Reporters Without Borders (RSF) raised concerns that media freedom has been rapidly deteriorating in the country, including withholding government advertising from critical outlets, accusations of government censorship, and violence and harassment of journalists by police during demonstrations. Greece has dropped five places in the World Press Freedom index, ranking third from the bottom amid European Union countries.

Article 191 of the amended criminal code sets penalties for “whoever publicly, or via the internet spreads, or disseminates, in any way, false news that is capable of causing concern or fear to the public or undermining public confidence in the national economy, the country’s defense capacity or public health.” The article says that violators “shall be punished by imprisonment of at least three months and a fine,” and it adds that “[i]f the act was repeatedly committed through the press or online, the perpetrator shall be punished by imprisonment of at least six months and a fine.”

The publisher or owner of a media outlet responsible could also face up to five years in prison and financial penalties. The offense is categorized as a misdemeanor, which under Greek law is punishable with a maximum of five years in prison, unless the law says otherwise. The new article 191 is based on a similar offense included in the criminal code before 2019.

Article 191 replaces a provision introduced in 2019 establishing criminal penalties for “whoever, publicly or via the internet, spreads or disseminates false news in any way, causing fear to an indefinite number of people or to a certain circle or category of persons, who are thus forced to carry out unplanned acts or to cancel them, at the risk of cause of damage to the economy, tourism or defense capacity of the country or disrupt its international relations,” punishable by up to three years in prison or a fine.

The new text does not define what fake news is, what standards should be used to determine if something is fake news, nor that any false information shared causes actual harm. It also makes no reference to the need to respect the right to freedom of speech or other human rights obligations, when invoking the provision.

Prior to the adoption of the amendment, Media Freedom Rapid Response, a Europe-wide network of media freedom nongovernmental groups, called on the justice ministry to withdraw the law. “We believe the draft law’s vague definition and punitive sanctions would undermine the freedom of the press and have a chilling effect at a time when independent journalism is already under pressure in Greece. … [T]he passing of heavy-handed legislation by governments which grants regulators or prosecutors the power to decide true from false and levy punitive fines on the press is not the correct response and would result in more harm than good.”

On November 10 the Greek Journalists’ Union of Athens Daily Newspapers (ESIEA) called for the law to be withdrawn as being too vague.

The International Press Institute reported in October 2020 that 17 countries worldwide had pushed through ‘fake news’ regulations during the Covid-19 outbreak. The only country in the European Union that had done so is Hungary, which in March 2020 criminalized the spread of “fake news” or engagement in “fear mongering” deemed to undermine the authorities’ fight against Covid-19 with fines and prison sentences. By July of 2020 Hungarian police had opened 134 criminal investigations concerning “fear mongering.”

With Greece facing intense international criticism over pushbacks and wider human rights concerns related to migration and asylum, the government has moved to silence groups whose reporting is shining a spotlight on those abuses. In its July EU-wide rule of law report, the European Commission noted the narrowing space in Greece for groups working with migrants and asylum seekers.

Greece is bound to respect the right to free expression under article 11 of the EU Charter of Fundamental Rights and article 10 of the European Convention on Human Rights, to which it is a party. Under international human rights law, governments have an obligation to protect the right to freedom of expression, including the right to seek, receive, and impart information of all kinds. Governments may only impose restrictions on freedom of speech if those restrictions are provided by law and are strictly necessary and proportionate to achieve a legitimate aim, including the protection of national security, public order, public health or morals, or the rights of others. Any such restrictions must also be written sufficiently clearly that those subject to the law can understand what is prohibited.

The new criminal code article falls far short of these standards, Human Rights Watch said. Not only does it fail to require that the “fake news” must cause actual harm, it also does not clearly define the prohibited content.

In September the European Commission President Ursula Von Der Leyen announced that the Commission would present a European Media Freedom Act in 2022, to “safeguard the independence of media.” The Commission should press Greece to repeal Article 191, Human Rights Watch said.

“The Greek government should stop pushing censorship on journalists, civil society and the public,” Cossé said. “If it is serious about tackling the spread of misinformation, it should demonstrate its commitment to freedom of expression and media freedom, not silence its critics through the threat of criminal prosecutions.” source: HumanRightsWatch