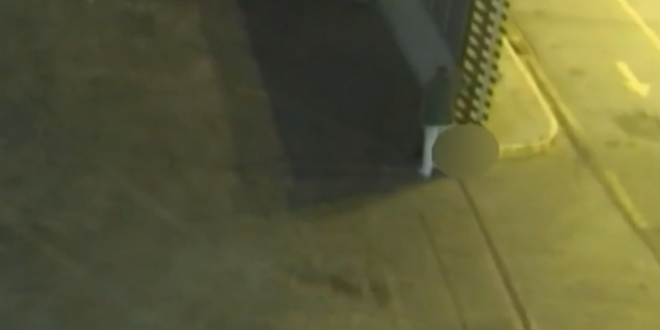 A new video from the tragic incident where an 8-year-old Roma girl was crashed by a sliding factory door in Keratsini shows a shocking behavior by 6 to 7 people towards a girl dying in front of their eyes.

Footage from security camera broadcast by Star TV on Thursday evening shows factory workers displaying an unprecedented human (?) indifference towards the little Roma girl Olga as she is dyeing in front of their eyes and do nothing to help -most possibly following orders by the management. At some point, one workers pokes the girl with his feet to see if she was alive or dead.

Around 5:30 p.m. on November 17, the girl shortly sought refugee in the yard of the factory in Keratsini suburb of Piraeus. As she tires to leave, her little body is being crashed not once but twice by the sliding metal door. Nobody helps.

For 20 minutes the little girl seems to be struggling to breathe, but no one helps her.

A factory workers passes by the girl, turns his head and walks away.

Almost a minute later, the worker returns and instead of helping the child, heads to the warehouse.

The footage shows him talking on his cell phone, passing in front of the little girl again and being indifferent for the second time. He looked at it, hung up the phone and continues walking away.

From the very first moment two to three workers have seen that little Olga was crashed by the factory door, but not one did something to help her.

17:55:02: The video reportedly shows an employee passing by the little girl again being stuck between the door and the wall, looking at her but doesn’t approaching her.

17:57:13 the door finally opens and the girl falls to the ground. Two workers approach, stand on her with a flashlight. They  then take a few steps back, talk to each other and walk away leaving the helpless girl behind.

At 18:05 a car drives by the body of the little girl. Immediately after, the factory workers leave the site following an order, as they said in their depositions to investigators.

A workers is capture by the security camera, to poke the girl with his foot. At the same time he is talking on his mobile phone.

At 18:31 a truck enters the premises, without it being clear if the driver sees the child. At 18:34 the door closed again with little Olga getting stuck again

The medical examiner’s report states that the death of the child was slow and torturous. The little girl was trapped between the metal door and the wall for 70 minutes.

The death of the 8-year-old Roma girl Olga was caused by suffocation and internal bleeding, as the heavy door crushed her spine.

It looks more and more like a racist motive as the girl’s family and their lawyer claim.