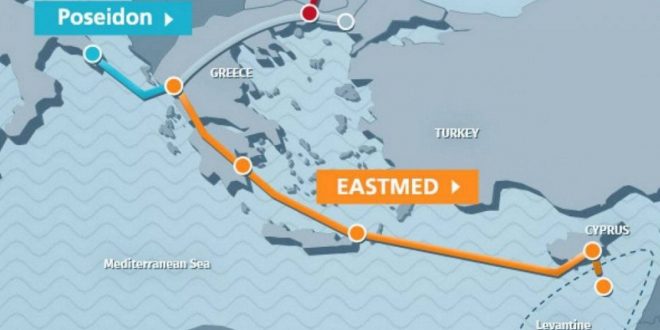 With a non-paper the US State Department has ‘ended” the EastMed project, Greek media have been reporting in the last two days. With a length of 1,900 km and a cost of some 6 billion euros, the Eastern Mediterranean pipeline (Eastmed) was planned to transfer natural gas from the Levantine Basin to Greece and from the to Italy and other European regions.

According to Greek media, the US state Department sent the non-paper to the Greek government, with the formal recipient being the Secretary General of International Economic Relations and Extroversion of the Minister of Foreign Affairs Giannis Smyrlis. The non-paper was reportedly sent also to The Israeli government, however, not to the embassies of Greece, Cyrpus and Israel in Washington.

Although the non-paper or parts of it have not been published and so far there is not official statement from the government, media report that Washington lists three reasons for not providing diplomatic support to the project.

In a Tweet posted by the Washington correspondent of Greek state broadcaster, it is stated:

“The non-paper for the EastMed Gas Pipeline lists 3 reasons for Washington not providing diplomatic support 1) environmental protection / energy transition / turn to renewables 2) lack of economic and commercial viability 3) creating tensions in the region.”

The US Ambassador to Athens, Geoffrey Pyatt has been reportedly posting on Twitter posts about the issue saying that there has been no change in the State Department regarding the EastMed project.

Michael/Christos – I assure you that these report are off base. I covered this last month at the @AmChamGr economic summit in a conversation with @KaterinaSokou The issue is commercial feasibility and on that we’re most excited about projects for regional electric interconnection

Lena, as you know we don’t generally comment on our private diplomatic activities, but this report gets it wrong on our agenda, which is focused on supporting regional interconnections that are economically viable and advance shared climate goals. The Athens press team has more.

Several Greek media see in the US decision a clear position in favor of Turkey that has vehemently opposed the project.

Some analysts note that the project had problems of financial viability right form the beginning, however, they point out at the geopolitical aspect of the EastMed as “a source of tension in the Eastern Mediterranean Sea and a clear US shifting of balance in favor of Turkey.”

The big issue for Greece is, though, that it created a whole narrative around the project cheering that it would turn the country into an energy hub in the area and would increase the geopolitical influence of the country.

In 2013, the construction of the EastMed pipeline was designated under European Commission Regulation 347/2013 as a Project of Common Interest and during the 2015-2018 period the Commission contributed more than €34.5 million (US$38.9 million) to complete technical, economic and environmental studies for the project.

The Energy Triangle of Greece, Cyprus, and Israel signed an intergovernmental agreement for the EastMed gas pipeline in Tel Aviv on 20 March 2019 in the presence of United States Secretary of State Mike Pompeo, in a sign of support from Washington for the project. American interest on the pipeline is explained by Washington’s demand that its European partners maintain a diversification policy of their energy imports The pipeline will diversify European gas supplies and lessen dependence on Russian Natural Gas. More on the issue here.