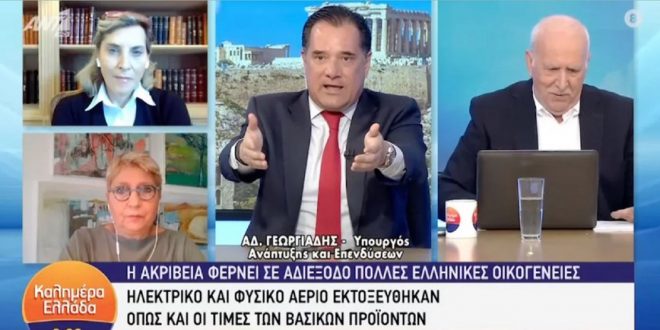 “Enough with whining and misery. I can’t stand misery anymore. I’m fed up with misery. Misery does not do good in Greece, misery harms the homeland, whoever is miserable all day harms Greece.” This was said by Development Minister Adonis Georgiadis on the price hikes during the morning magazine on ANT1 TV on Monday morning.

The Minister admitted that basic products have increased but spoke of a global phenomenon.

He said “Our economy is doing extremely well compared to others. And we have achieved something that the German Minister of Finance said in the German parliament as a praise for Greece. Greece is a country that has managed to have high growth and low inflation*. They presented us in the German parliament as an example of success. Do not moan all day, everyone else can say that we are doing well and we moan all day. This can’t be done!”

*inflation is estimated at over 5.5% in January, ELSTAT will release the official data tomorrow, February 15. BTW: the German praising on Greece’s economic achievements was 2 years ago or something, if I’m not wrong.

Minister Georgiadis admitted that “prices have increased, especially in energy that also drags higher prices in a number of products”, but added that “the same problems with the Greek businessman have also the Italian and every European businessman, but In no other country is the subsidy given to entrepreneurs given by the Mitsotakis government. Let alone the fact that there is inflation elsewhere.

“Spain has half the growth of Greece, double the inflation and increase of the unemployment”, he claimed in his usual populist way of comparing apples and oranges like Gus Portokalos and naming all ‘fruits’ without mentioning distinctive features like monthly salaries.

When asked by a journalist on the panel whether is it misery or reality that a businessman who had 800-1,000 euros electricity bill now is called to pay €3,500 or a citizens pays now €20 more for basic needs, the minister said  “we all pay more for products, but not all of us have the same difficulties.”

“For the part of the fellow citizens who really have difficulties, there will be targeted measures” he added obviously speaking about a planned aid of 100 euros for vulnerable citizens over Easter to buy food.

Video in Greek is here and here.

PS Aiming to provide some calmness to the always nervously shouting minister, KTG has decided to end the misery reporting and cheer for the fact that the 15-day order for the cat goes up by 2.50-5 euros each time lately.

BTW: The cat is on diet starting tomorrow with long strolling in the empty plots nearby. You know for grazing and whatever else comes along…