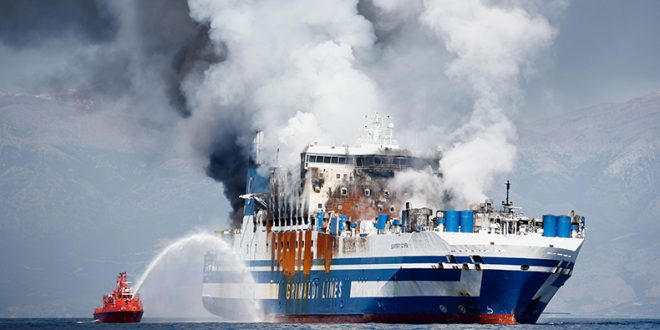 Τhe still-smoking Euroferry Olympia is being towed to a safe harbor in western mainland since Tuesday morning to facilitate the work of firefighters and rescuers. The removal of the ferry from the north of Corfu to the Astakos on the mainland coast has triggered outrage among the relatives of the ten missing passengers who still have hope that their beloved ones could be rescued.

“I don’t mind safety or environmental reasons, I want the ferry here and that the rescuers keep doing their job,” the wife of one of two missing Greek truck drivers told media. The woman and her son traveled to the island of Corfu on Friday when they heard that the ferry with which their beloved husband and father caught fire.

“You can’t imagine what will happen when the autopsy determines the time of his death,” the woman warned.

As long as the ferry is towed there can be no rescue or fire extinction operations. 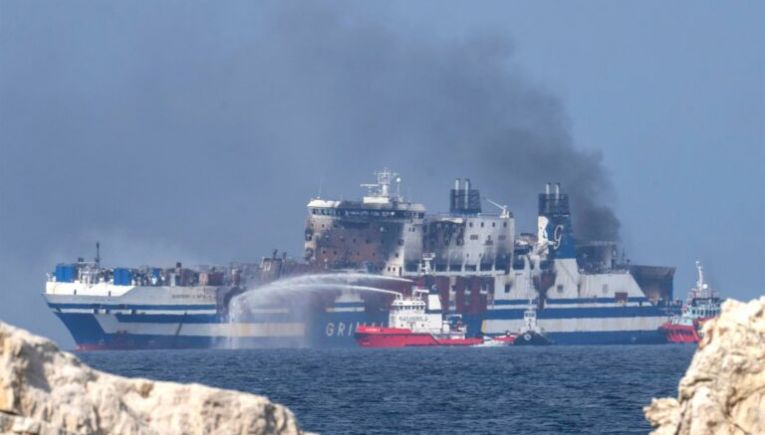 The ferry left the North-West of Corfu at 11 a.m. on Tuesday, covering some 35 nautical miles until the afternoon and reaching off Igoumenista. It will need another 15 hours until it reached the port of Platygialos in Astakos.

“No rescue operations as long as the ferry is towed. What do they want? That we get their ashes?” a relative of another missing Greek truck driver stressed.

But hopes for survivors have faded on Tuesday, the 5th day after the fire broke out and continued all these days and nights.

According to the Shipping Ministry, the position of the ferry, in the north of the Ionian island of Corfu, was preventing the fire service from fully extinguishing the blaze that has already claimed one life.

The fire on the Italian-flagged Euroferry Olympia broke out in the early morning hours of Friday, February 18, as the ferry was sailing from the port of Igoumenitsa to the port of Brindisi in Italy.

Some 280 passengers and crew were rescued from the ship, including a truck driver who was found on Sunday, the same day that one of his colleagues was found dead in the cab of his truck.

According to the fire service, the search for the other 10 missing passengers cannot continue until the blaze is brought more fully under control, something that is not possible in its current situation.