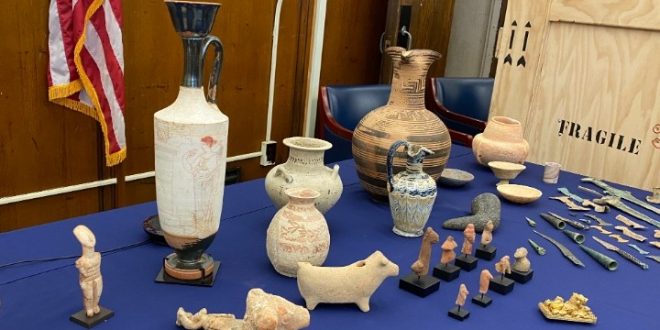 Fifty-five archaeological artifacts of high artistic, historical and symbolic value were handed over to Culture Minister Lina Mendoni in a special ceremony held in the USA on Wednesday. It was the Attorney General of Manhattan Alvin Bragg who handed over the artifacts.

Among them were 47 antiquities from the M. Steinhardt Collection and eight prehistoric works from Thessaly.

The 47 illegally trafficked Greek artifacts were among the dozens surrendered by American hedge-fund billionaire Michael Steinhardt under a deal with US authorities in late 2021.

Receiving the artifacts, Mendoni said: “It is a day of great happiness for Greece as 47 antiquities from the M. Steinhardt Collection return to their homeland, as well as eight other prehistoric works from Thessaly, which come from another investigation.”

She spoke of “methodical and tireless efforts” on the part of the Attorney General.

“We are deeply convinced,” Mendoni added, “that the fight against the illicit trafficking of cultural goods is won with patience, perseverance and method, but above all with the close cooperation of people, institutions and states that consciously fight against the smuggling of antiquities.

“The illegal trafficking of the cultural treasures of our country is a serious problem that hurts all Greeks around the world,” the minister pointed out.

Attorney General Alvin Bragg expressed his enthusiasm at having contributed to the completion of this investigation, adding that he felt honored to be a part it. via Greek Culture Ministry.