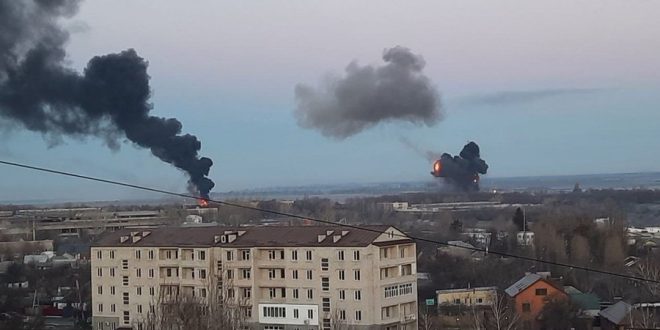 “SYRIZA-Progressive Alliance unequivocally condemns Russia’s military operations in Ukraine since early Thursday, which violate the territorial integrity and sovereignty of the country.

The EU must use all diplomatic means to ensure peace and a return to the negotiating table..

Meanwhile, measures must be taken to support the Greek community and the Greek citizens in Ukraine.”

“30 years after the dissolution of the Soviet Union and the overthrow of socialism, which many celebrated because it was supposed to make the world more “peaceful” and “safer”, another imperialist war broke out on European soil, after the war in Yugoslavia and elsewhere.

The typical start of the war is the unacceptable military intervention and invasion of Russia to Ukraine, however, the flammable material has been gradually accumulating in the region for years.

Regardless of the pretexts used by both sides, the war in Ukraine is the result of intensifying rivalries between the two warring factions, focusing first and foremost on spheres of influence, market shares, raw materials, energy plans and transport routes, competitions that can no longer be resolved through diplomatic-political means and fragile compromises.

On the one hand are the US, NATO, the EU, which support the reactionary government of Kiev, the paramilitary mechanisms and the fascist groups of Ukraine and which for years have been promoting their positions (NATO enlargement with Eastern European countries, missile defense shield, etc.), aimed at the economic, political and military siege of Russia.

On the other hand is capitalist Russia, which is promoting its own plans for the capitalist unification of the countries of the former USSR and which in recent years has proceeded to the annexation of Crimea to the Russian Federation and the recent recognition of the “independence” of the so-called “People’s Republics” of Donetsk. of Lugansk.” (full statement in Greek here.).

STOP to Putin’s invasion. STOP every NATO plan to get involved in a deadlocked escalation of war. PEACE through the diplomacy of the peoples, not of the warlike oligarchs.

“February 24, unfortunately, will go down in history as a black day for Europe. The Putin-NATO geopolitical games eventually sparked war. Today, it is important to stop the invasion, return the Russian troops to their base and start a sober peace process.

It is still important to fight so that there is no involvement of Greece in a deadlock, dangerous conflict in our region.

Immediate ceasefire and lasting peace is what is required “.

But it is a given that, with these leaders in Moscow, Washington and the EU either firing or tolerating the tensions that have led us here, a genuine peace process is impossible.”

Still waiting for the statements of KINAL and Greek Solution…