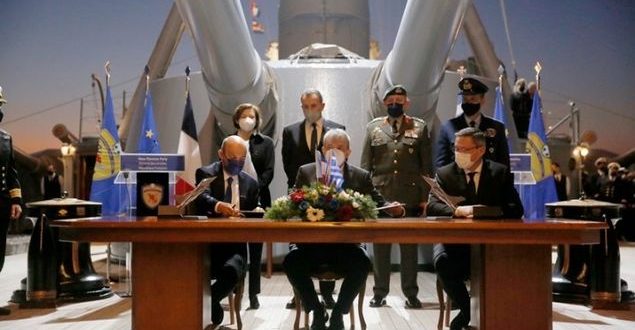 The Rafale fighter jets will be sold to Greece by Dassault Aviation and would be delivered from the summer of 2024, bringing the Hellenic Air Force’s fleet to 24 Rafales, the French warplane maker said in a statement.

Under the procurement deal, Greece will be supplied with three Belharra frigates, with an option for a fourth.

The deal was signed by the defense ministers of the two countries, Nikos Panagiotopoulos and Florance Parly, on board of the “Battleship Averof”, a floating museum docked in southern Athens.

Following the signing on the Averof, the officials paid a visit to the French aircraft carrier “Charles de Gaulle” and were given a tour by its captain.

Minister Panagiotopoulos said that “never have negotiations for such complex and large armaments programs been completed so quickly and methodically,” and reiterated that the Belharras and Rafales will contribute to Greece’s ability to defend its territorial integrity and its sovereign rights, and act as a deterrent.

The collaboration between Greece and France is a great advantage, and will help in constructing the European defense of the future, he noted.

One of the biggest aircraft carriers, the Charles de Gaulle moored off the Piraeus port on Thursday and is reportedly scheduled to sail of for the naval base of Souda, Crete, tomorrow Saturday, to participate to he multinational exercise Iniohos..