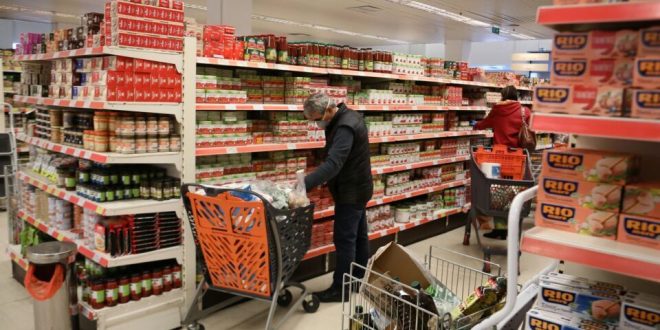 Greek households store food due to war in Ukraine (POLL)

Greek households store food due to the war in Ukraine, a market survey has found. Turnover in value of food retail increased by 5.1% in the first week of March.

According to NielsenIQ data, in the first week of March, many food categories, such as pasta, showed a very large increase in sales in value compared to the corresponding sales last year (second week of March). (+ 43.6%), flours, legumes (+ 20.6%), but also canned meat (+ 64.8%).

According to the available data, the jump in sales for these categories is more related to the fear of buyers due to the war in Ukraine, as well as their concern about rising prices in certain categories of food.

At the same time, prices are high in some basic categories of daily use.

During this period, seed oils sales increased by 37.4% and olive oil by 33.9%. This increase is due to an overwhelming increase in the average selling price and not to an increase in volume and demand.

According to NielsenIQ data, all major product categories showed a positive trend in the first week of March.

Fresh and products sold οπεν by weight recorded the most modest positive trend, at + 1.1%, a fact that is most likely related to the return of consumers to the open farmers’ markets, as this year no restrictive Covid-measures in this secotr were in force.

Respectively, the most positive trend of 41.7% is presented by the large category of Bazaar products (clothing, electrical appliances, books, tools, garden items, car items, home equipment, etc.), as last year there were restrictions on the sale of some categories of durable goods from the supermarket channel.

In terms of fast-moving consumer goods (FMCGs), they showed almost the same trend as the market as a whole, at + 5%, with personal care products recording the largest increase at + 9.1%. It was followed by food & beverages at + 4.6% and the categories related to household products with + 4.5%.  – via cnngreece

POLL: And You? Have you store food due to the war & price hikes?