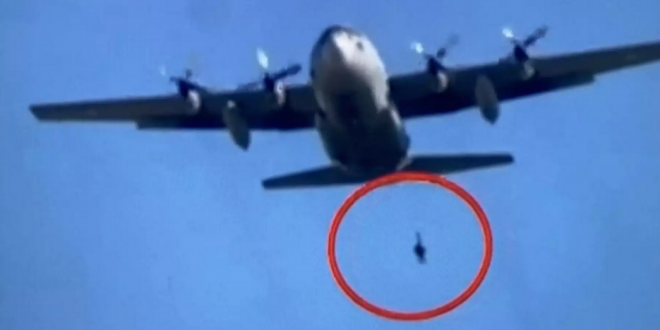 A paratrooper of the Greek Armed Forces remained hanging in the air outside a C-130 at a height of 5,000 feet for several minutes after his parachute failed to open during an exercise in Cyprus. The unprecedented incident took place during an exercise in Larnaka and a tragedy was averted because his colleagues managed to recover him from the extremely dangerous situation over the C-130 jump.

It all started when the C-130 took off from Larnaca airport. When it reached about 5,000 feet, a green light was turned on so that the members of the Special Forces fall with a static belt.

The first of the 40 paratroopers fell into the void from the side door of the aircraft. However, the belt did not open the parachute, with the result that the man was left hanging in the air, at a distance of 4.5 meters from the aircraft as much as the length of the belt.

The paratrooper tried to unblock the parachute, while he was held by the safety ring that connects the belt with the parachute bag. Eventually, the other paratroopers on the plane pulled him inside  and prevented the worst.

According to media information, the chief of General Staff, General Konstantinos Floros, will award the commandos who participated in the operation and faced the emergency situation that occurs in extremely rare cases, as well as the pilots of the C-130 transport aircraft of the Air Force.