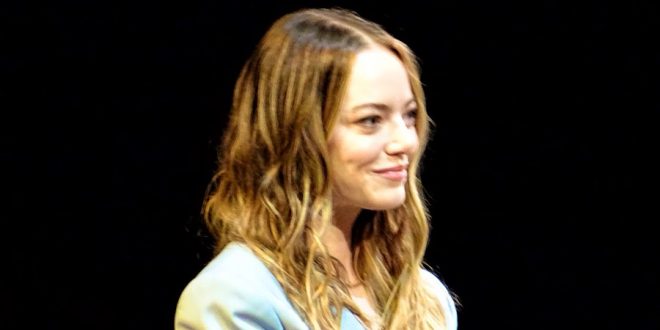 Emma Stone in Athens for premiere of “Bleat” directed by Lanthimos

Hollywood star Emma Stone is currently in Greece for the premiere and promotion of the short, silent black and white film “Bleat” directed by Yiorgos Lanthimos. She arrived in Greek capital Athens on May 4 and her professional duties did not hinder her to watch a basketball game live in the Greek capital Athens and her fans around the world cheer.

“Bleat” is a Greek silent movie with surreal and disturbing scenes of sex, death, and resurrection, was a professional challenge and a relief, writes the AP” rel=”noopener” target=”_blank”>associatedprees citing the star.

Playing a young widow in the 30-minute, black-and-white film, Stone said she welcomed rejoining Greek director Yorgos Lanthimos for the limited-release project set on the Greek island of Tinos and featuring goats roaming its rock-and-thorn landscape.

“What I like about Yorgos would take me a very long time to answer,” Stone said Thursday after a screening for the news media in Athens, and on the eve of the premiere at the Greek National Opera.

“In short I’ll say it’s very rare that you meet somebody who you get along with so well but on top of that artistically (provides) the ability as an actor want to give yourself over to something and not have to worry about every small move you make.”

the premiere of “Bleat” is later today, May 6, at the Greek National Opera.