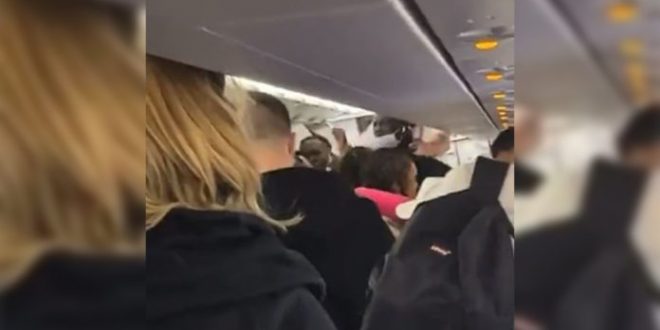 Drunk British tourists on the flight from London to Chania, Crete, did not hesitate to beat even the pilot when he tried to intervene and put an end to the chaos that had unfolded in the plane of WizzAir.

Ar least two drunk men harassed, swore and even beat other passengers and the adventure in the plane corridor and seat was captured on a video by a passenger who posted it on social media.

@wizzair guessing this is the reason our flight was delayed (5 minutes prior to boarding) for 12 hours… we were then LOCKED in the airport by security with no explanations? Again now been delayed getting on for nearly 24 hours. #wizzair pic.twitter.com/WTIslAlsN1

According to eyewitnesses two men, about 30 years old from Bermondsey in South London, together with a third one had consumed consumed about a liter of vodka.

“The two men were obviously drunk and boasted that they had been drinking at the airport since 10 in the morning. We knew we were going to get in trouble from the moment they sat in someone else’s place and cursed him. I was surprised they let them fly because they were so aggressive before we even took off,” one woman told British daily The Sun.

“We did not dare to complain because everyone was attacked and people were told ‘when we get off this plane I will crush you.’ They smoked during the flight and drank constantly. They continued to serve them alcohol, despite the fact that the passengers told the flight attendants that they had probably drunk enough,” said another passenger.

A 37-year-old passenger on the same flight said: “It was a complete mess. They were very aggressive throughout the flight. When the flight attendant told them that they would get off the plane when we landed and would be accompanied by police, they got angry. A group of men went to hold them back,but they started punching them.”

The pilot came out and the guy hit him too. He looked okay, but he was quite upset. “It was a shame.”

Local media reported that at least one of the troublemakers, a 31-year-old man, was arrested upon the plane arrival at the airport of Chania. One Canadian passenger suffered a bodily harm. The captain had filed a lawsuit against him.

What the company said about the incredible scenery

According to local news website zarpanews, a WizzAir spokesman said:

“On Wizz Air flight W95741 from Gatwick – Chania, a passenger became unruly. The cabin crew handled the situation as they are trained to do and reported the incident to the competent authorities, who arrested the passenger on arrival.

Wizz Air confirms that the crew was asked to go to the airport police station to testify in the case.”