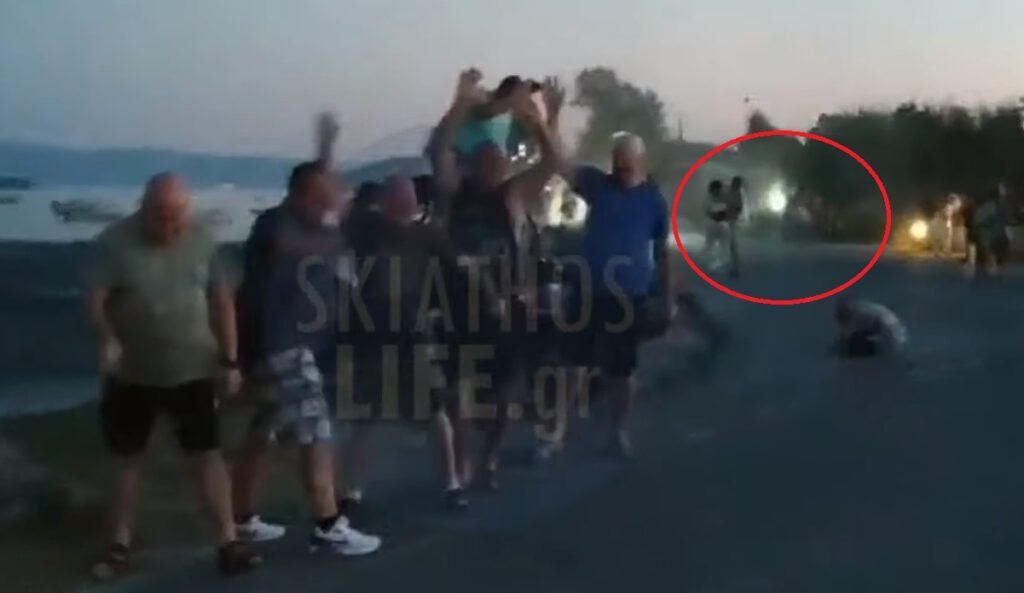 A video has captured the moment when the British tourist was knocked down by the turbine blast of an airplane taking-off from the airport of Skiathos on Tuesday evening. The 61-year-old suffered brain and other injuries and was taken to the hospital of Volos on the mainland.

The footage shows a group of spectators outside the airport, just meters away from the runway, and the airplane making a turn near them. A group of men is trying to withstand the power of the blast.

The woman is seen first walking, and then trying to avoid the blast but she also raises her arms in an effort to keep her balance, however, with the effect that she is being knocked down and swept away and …into the sea.

A younger person is also knocked down.

The video dismisses initial reports that the woman was standing on a bench.

The British tourist was initially taken to the health center of the island where she was diagnosed with brain injuries, pelvis fracture as well as shoulder and arm injuries. (KTG reported here)

A hematoma in the brain made her transfer to the hospital of Volos necessary, local media reported.

According to media reports on Thursday, hospital doctors are trying to treat her brain injuries and appear optimistic about the course of the health of the British tourist.

The 61-year-old-woman was spending vacations on Skiathos with relatives.

The airport of Skiathos is famous all over the world for the spectacular landings and take-offs of the aircraft, since the runway is adjacent to the coastal road, with the result that the planes fly only a few meters above the people who gather to capture the moments.

This spectacle is a benchmark for the island.

There are traffic lights at the site, as well as dozens of warning signs that warn of the danger posed by the presence of people behind the runway.

It is the second incident where someone suffers injuries in less than a month. A 79-year-old man, also a British tourist, was thrown into the sea from an airplane blast on June 20.

Speaking to media, the mayor of Skiathos, Thodoris Tzoumas stressed that there are sufficient warning signs in the area that must be respected by the people.

“We have notified the relevant company that manages the airport after the accidents, but the area has sufficient warning signs, even a traffic light. Some, however, choose to overestimate their capabilities and stay on the point. But it seems as if we are trying to pass through while the red traffic light is on,” the mayor underlined.the red light” emphasizes the mayor of Skiathos.

Tzoumas added that many of the spectators “make the mistake and get too close to the point where the plane takes off. And when we talk about people who are of a certain age, they don’t have much strength to control their body from the intense current that is created, so there is a very serious risk of getting injured.”

However, the managing company of Skiathos airport “Alexandros Papadiamantis”, Fraport, has reportedly said in a statement that the  incident regarding the injured “61-year-old British woman, who was there to film the take-offs of aircraft from Skiathos Airport, […] occurred outside the Skiathos Airport.”

Fraport emphasized that “the airport management and operation body has taken all the necessary security measures within the concession limits, and therefore also the airport, and anything that takes place outside it is not subject to its responsibility. In any case, the company’s priority is always the safe and smooth operation of the airport and the safety of passengers.”

The incident with the serious injury on Wednesday caused the intervention of Volos prosecutor’s office, while the case is being investigated by the police department and the port authorities of Skiathos.